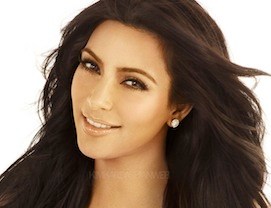 How Broke can you be with a social-media titan in your corner?

That’ll be the question facing 2 Broke Girls‘ protagonists Max (Kat Dennings) and Caroline (Beth Behrs) when Kim Kardashian shows up in the CBS comedy’s Season 4 premiere as herself — and shines her spotlight on their fledgling cupcake business.

“They need a big bump, and providence sort of smiles on them when they find out that Keeping Up With the Kardashians is doing a segment in Williamsburg, and that they may make an appearance at their shop,” executive producer Michael Patrick King tells TVLine. “The girls know what that kind of exposure would mean to them. And it turns out there is a bit of a cherry on the ice cream, or the cupcake, because Kim does appear at their window.”

Don’t expect, however, that the presence of Kanye West’s bride will transform the Monday-night series into 2 Upper Middle-Class Girls. “Because it’s a comedy, and because they are broke, it’s not a complete silver lining,” King adds. “But it is an incredibly sparkly star at the end.”

The showrunner shares that Kardashian has already shot her season premiere scenes — and proved to be a great sport.

“There are the typical 2 Broke Girls jokes all about [the Kardashians] in the episode,” King previews. “So, it’s fun to see someone have a great sense of humor about herself. She read the script, she thought it was funny and she came. We could’ve [shot] the exact same [episode] without her — but she was the cherry on top.”

Given the show’s “struggling twentysomethings” premise, the EP added, “it makes sense for us to do an episode about what 22 million Tweets would mean to a business.”

Excited about Kardashian’s casting? Do you think she’ll fit into the Broke Girls‘ universe? Sound off below!