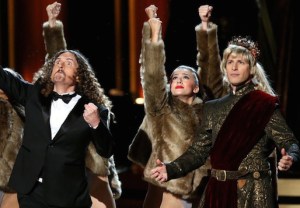 Compared to the most recent Emmycast to not have an NFL lead-in (ABC, 2012), NBC’s numbers were up 17 and 8 percent, scoring the event’s second-best audience in eight years and matching its second-best demo delivery in seven years.

Facing off against the Emmys….

* CBS’ Under the Dome delivered 6.6 million total viewers and a 1.4 demo rating, down 10 percent and a tenth.