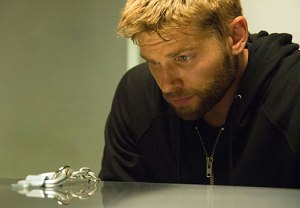 It’s just like The Rolling Stones used to sing: “I see a red door and I want it… to take me through the space-time continuum into a new and unfamiliar place.”

OK, I may have gotten that lyric wrong.

Regardless, the ninth installment of Under the Dome‘s second season — titled “The Red Door” — indeed brought us somewhere new: a few steps closer to understanding why the dome came down three weeks ago (as Barbie’s voiceover so often reminds us).

THEY’VE GOT THE POWER | After Barbie is apprehended by guards at the dome’s edge, he finds himself shackled to a table in an interrogation room. But the men trying to get information out of him — namely, why he was seen at the dome the previous night, and how they can get the egg from Julia — aren’t police, nor are they in the military. As Barbie’s dad reveals upon visiting his cuffed son, Aktaion Energy has been working with a private security firm ever since the failed missile strike at the dome. And although it seems like Barbie Sr. is intent on getting his son out of custody, we’re shown a different side of the story: Barbie’s dad is actually in cahoots with the security firm, and he cares less about his son’s safety than he does obtaining the egg from Chester’s Mill — or, as Mr. Barbara calls it, “the power source.”

Knowing full well that Julia would be willing to trade the egg in exchange for a free and unharmed Barbie, Barbie Sr. enlists Hunter to film a video message for Julia, which she receives at the high school in Chester’s Mill. The basic gist: If she doesn’t give up the egg, he doesn’t know what will become of Barbie. Melanie is appalled to find that Julia is actually considering giving up the egg to these greedy jerks and, crestfallen, admits that Julia’s priorities may have changed. (But more on that later.)

Meanwhile, Barbie (being the badass that he is) manages to get the upper hand against his interrogator, knocking the guy out before uncuffing himself and grabbing his adversary’s gun. He takes off to the Hounds of Diana headquarters, where techie Hunter and his co-worker Trevor run their underground website. But Barbie isn’t alone: Lyle, Sam and Pauline are also there — Hunter was apparently one of Pauline’s best students when she taught high school art, go figure! — and their search for the red door has so far been fruitless. Barbie takes a look at Pauline’s postcard and immediately recognizes the door, prompting the whole group to follow where Barbie leads — but not before he tells them that Sam killed Angie back in Chester’s Mill. When Pauline hears that Sam planned to kill all four teenagers in order to bring down the dome, she knows they must go to Chester’s Mill and “atone for their sins,” or they’ll never find peace. So, off they go!

AN EGG-REGIOUS MISTAKE | Back in Chester’s Mill, Big Jim knows Barbie is alive and tries to get Julia to admit as much. When she doesn’t, Big Jim asks Junior if he knew Barbie survived the fall, which Junior says he did. Then Junior really gets blabbing, telling his dad that Barbie’s captors want the egg and that finding the egg could be what the dome “chose” Big Jim for. (I think I actually saw Big Jim’s head get bigger here, how about you?)

In pursuit of the egg, Big Jim heads to the dome’s edge, where the whole thing turns into a scene from The Leftovers. He and one of the dome guards exchange handwritten notes, ultimately determining that if Big Jim gets the egg from Angie’s apartment, he and Junior can take the swan dive into Zenith. When confronted by Julia about his plans to take the egg, Big Jim insists that he’s doing so to protect the town. (Ha. Ha. Good one, Big Jim.)

While his dad is busy scheming, Junior takes Melanie down to the storm cellar (where he takes all the girls, apparently). They’ve got the egg in their possession, after agreeing to protect it together, and Melanie insists on laying down for a while to enjoy the peace and quiet of the cellar. Junior begrudgingly cuddles with her, and the whole thing is way uncomfortable.

THE CHRONICLES OF ZENITH | Barbie reveals to Sam, Pauline & Co. that the red door they’ve been searching for is the door of a root cellar at his childhood home — where Barbie Sr. still lives. Hunter’s fellow computer whiz Trevor acts as a decoy at Mr. Barbara’s house, allowing Barbie and the rest of the group to locate the cellar and head downstairs. Once there, they discover a paneled wall that Barbie doesn’t remember from his childhood, and it leads them to the other end of Chester’s Mill’s mysterious tunnel. One by one, each person in the tunnel is encompassed by a spiraling cloud of smoke — which Pauline envisioned earlier in the hour — which takes them back to the lake in Chester’s Mill. But before they reach their destination under the dome, Barbie, Sam and Pauline each experience strange flashback-y/premonition-y visions.

Sam’s is a flashback to Pauline’s funeral, where a young Junior expresses disappointment that he must stay with his dad instead of going to live with Sam. (Also, young Junior is way creepy.) Barbie’s flashback, meanwhile, shows him as a child, when he first marked the root cellar door with a tiny handprint. And who’s the young girl encouraging him to do so? None other than Melanie, who was instructed by her mom to meet mini-Barbie for reasons that aren’t revealed. Pauline, meanwhile, has a different sort of vision, in which she and Melanie are reunited in the ditch where Melanie died, with the egg shimmering in the center. “This is where it began, and this is where it ends. For all of us,” Melanie warns.

Barbie, Sam, Pauline and Hunter make it through the portal into Chester’s Mill, but it seems Lyle wasn’t so lucky. Still, the rest of the group has work to do, and they each go their separate ways — Barbie to find Julia, Pauline to find Junior, Sam and Hunter to…. lay low and not ruffle any feathers. In the final scene of the hour, Pauline heads back to her old house, looking fondly at photos of Junior, both old and new. But when she turns around, she’s faced with Big Jim, who manages the only thing a guy can when he sees his “dead” wife: “Pauline?”

What did you think of the episode? As absurd as the show continues to be, isn’t it nice that we seem to be moving toward answers? Sound off in the comments!