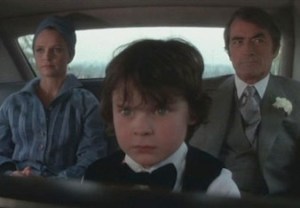 Lifetime’s latest project is “all for you!”

The cabler announced Monday that it has given a six-episode, straight-to-series order to Damien, a sequel drama based on the 1976 horror classic The Omen.

Written and executive-produced by former Walking Dead showrunner Glen Mazzara, Damien follows the adult life of evil Omen child Damien Thorn, who must come to terms with being the Antichrist after growing up unaware of the satanic forces around him.

“We are thrilled to be bringing a contemporary version of The Omen’s Damien Thorn back to the screen,” Lifetime’s Executive Vice President Rob Sharenow said in a statement. “Glen Mazzara has reimagined him as a dark, romantic antihero and this fresh take blends complex characters with premium storytelling to make something truly original.”

Produced by Fox Television Studios, Damien is slated to premiere in early 2015.

* HBO has unveiled the first teaser for the third and final season of The Newsroom. The trailer, which shows the pages of a Season 3 Newsroom script getting photocopied, hints that Will McAvoy could be quitting his job at ACN — but why? Press PLAY on the video at the bottom of the page and make your predictions for what Season 3 will bring.

* Amazon has greenlit five kids pilots — The Stinky & Dirty Show, Buddy: Tech Detective, Niko and the Sword of Light, Table 58 and Just Add Magic — to round out its third cycle of original programming.

* The Price is Right is asking male models to “come on down” in the show’s first-ever nationwide casting call for fellas. The search will be featured in a six-episode web competition series on The Price is Right’s website, with casting calls taking place in Los Angeles, Boston, Philadelphia, Dallas and Spartanburg, S.C.

* AMC has released a new teaser trailer for Better Call Saul, the cabler’s upcoming Breaking Bad prequel. Press PLAY on the video below to learn more about Saul Goodman — er, Jimmy McGill, rather — in his pre-Walter White days.