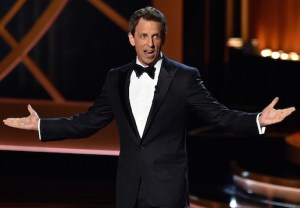 Seth Meyers set the bar lower than a Kardashian Q-rating for his debut gig as host of the 2014 Emmy Awards.

“If you can avoid a train wreck, everyone will be happy,” Meyers told Today host Al Roker some 12 hours before he took the stage for a much-scrutinized opening monologue.

So how did the host of NBC’s Late Night fare on TV’s biggest night?

Well… first off, there were no special guests, no dancers, no musical interludes, no stinging/edgy zingers, no pre-taped parodies and no wacky montages.

Instead, the genial former head writer for SNL relied on topical TV humor, joking that the telecast’s positioning on a Monday night in August was essentially network shorthand for “about to be cancelled,” then arguing that a network-hosted awards show that gives all its statuettes to cable series was akin to music-free MTV holding the VMAs.

The host also discussed the series finales of Breaking Bad, Dexter and How I Met Your Mother, pointing out that “Jesse Pinkman lived, Dexter lived, but your mother didn’t make it: Sleep tight!”

RELATED  Emmys 2014: Ausiello Picks Who Should and Will Win

Finally, Meyers ended with a discussion of HBO’s Emmys dominance (it’s like a kid in high school who wound up doing a lot better than you’d expected), Netflix’s 31 nods (and how they’ve given the networks a reason to cheer — since it means cable is no longer the new/hot kid on the block) and NBC’s Emmy fortunes (“it’s also a network,” he joked).

It may not have been LOL-rageous, but it was pithy and moderately amusing — perhaps not the worst tone to set for this weekday affair?

What did you think of Meyers’ opening monologue? Grade it in our poll below, then sound off in the comments!