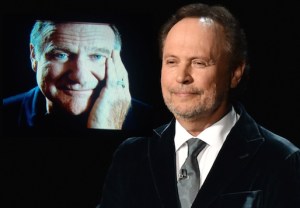 The 2014 Emmys took a moment on Monday night to remember the late Robin Williams, who passed away Aug. 11.

Following the traditional In Memoriam segment (which was accompanied by a sublime “Smile” cover from Sara Bareilles), Williams’ longtime friend and colleague Billy Crystal took the stage to eulogize the actor-comedian.

“He made us laugh. Hard. Every time you saw him,” Crystal remembered. “The brilliance was astounding, the relentless energy was kind of thrilling.”

After recounting a few anecdotes of their friendship — including Williams’ hilarious tendency to sit with Crystal’s older immigrant relatives at family functions — Crystal admitted it was difficult to speak in the past tense about his friend.

“As genius as he was on stage, he was the greatest friend you could ever imagine,” the actor said. “It’s very hard to talk about him in the past, because he was so present in all of our lives.”

RELATED  Robin Williams: 13 Things You May Not Have Known About His Life, Legacy

Crystal’s parting words — “Robin Williams. What a concept.” — led into a short montage of Williams’ memorable appearances on The Tonight Show (with hosts Johnny Carson and Jay Leno), Inside the Actors Studio and a particularly poignant excerpt from his Night at the Met stand-up special.

What did you think of the tribute to Williams’ life and career? Any other performances you would have liked to see included? Drop a line in the comments with your thoughts.