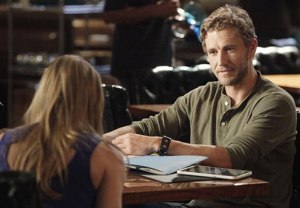 The proverbial (emotional) rollercoaster is careening off its rails and heading over a cliff as Season 2 of Mistresses heads into tonight’s penultimate installment and next Monday’s finale (10/9c, ABC).

And while executive producers Rina Mimoun and K.J. Steinberg can’t guarantee that every one of its leading ladies’ storylines will be wrapped up as gorgeously as a Maison Sur Mer bauble, they are promising a religious experience for Karen, an escalation of Joss’ abs-olutely gut-wrenching choice and the possible rekindling of Daniel’s status as an (FBI) agent provocateur.

RELATED Emmys 2014: We Pick Who Should and Will Win — Plus: Reader Poll Results!

TVLine caught up with the sassy showrunning duo for a heaping plate of teases (and a few anxiety-inducing sides):

KAREN’S OMINOUS VISITOR | Last week’s episode ended with Karen’s erstwhile lover Ben, sweaty and stressed, tracking her down and giving her the “we need to talk” treatment — and Mimoun says viewers “should definitely be worried about the implications. We’re playing with the consequences of what Karen did earlier in the season — not just physically, but emotionally.” Steinberg adds that Yunjin Kim’s hapless shrink “represents rock-bottom for us all — and the heroism of clawing your way out of that.” Part of Karen’s journey, though, will lead the bar-hopping, bed-hopping character to a very unexpected location: Church! Steinberg notes that the pilot introduced Karen in a house of worship — at Tom’s funeral — and her return will complete a circle, of sorts. That said, both showrunners agreed that Karen’s decision to abandon her psychiatric practice and seek a new career was probably overdue. “We’re pretty sure the entire psychiatric community stood up and cheered about that,” Steinberg notes with a hearty chuckle.

APRIL CONSIDERS HANDCUFFS — AND NOT THE SEXY KIND | If you noticed April’s hesitation after receiving a burner phone in the mail from her presumed-dead-and-now-wanted-by-the-FBI-hubby, you were not mistaken. But Minoun promises that whether or not April decides to cooperate with the Feds, offer a helping hand to Paul or even give sexy undercover agent Daniel a second chance to cover her in acrylic paint and explore abstract eroticism, she’ll always be guided by one force: “It’s great to have love lives and passions, but once you have a kid, it changes everything,” says Mimoun, who like Steinberg, also has a young child. “Lucy is April’s greatest love — and putting her interests first is at the epicenter of every decision she makes.” Which raises the question: How could April ever forgive Daniel for lying about his identity and worming his way into her and her daughter’s hearts as part of an undercover sting operation? “If things get dangerous enough and she needs him enough, she might overlook the deep betrayal,” Steinberg previews. And if that tease doesn’t make you anxious enough, the EPs also warn that by season’s end, one part of April’s arc will reach a satisfying conclusion, while the remaining half will wind up at the corner of Cliffhanger Ave and “Oh No, What Now?” Blvd. That’s especially scary seeing how Mistresses is on the bubble for a Season 3 renewal. “It’s the greatest cliffhanger of all,” admits Steinberg.

JOSS’ CHOICE | “The heat gets turned up” for Joss in the final two episodes — and we’re not talking about the kitchen at Wunderbar, either, says Mimoun. The brutal story of choosing between adorable fiancé Scott and stormy ex-brother-in-law Harry, however, led to some beautiful moments for actress Jes Macallan, Steinberg contends. “She’s amazing in [Episode] 12 — and wait ’til you see her in 13,” she previews. Mimoun concurs, saying the “best gift” of her Mistresses ride has been “discovering Jes Macallan.” Less fun? Duking it out with their colleagues about which suitor is ultimately right for Joss. “We have ‘teams’ in the writers’ room,” says Mimoun. “What’s great about Harry is that he has never been perfect. He can be cruel, he’s ruled by ego, he’s not vanilla.” But lest you think Scott is all puppy dog, no bite, she adds that the penultimate installment finds Justin Hartley’s alter-ego feeling out Harry’s intentions — and subtly sending the following message about Joss: “That’s mine!”

ZACK ATTACK? | While Steinberg says that Jason Gerhardt’s motorcycle-riding hunk was brought in for a darker arc opposite Alyssa Milano’s Savi, the actresses’ pregnancy “limited what we wanted to do in a lot of ways.” Gerhardt, to his credit, “took that left turn with us, and was so willing to play,” she adds. However Savi’s story wraps up, though, Mimoun makes clear that “Zack is a part of the journey that leads Savi to her decision in the finale, but Zack is not the answer.”

Excited about Mistresses‘ final two Season 2 episodes? Any hopes or dreams for how the various storylines will wrap? Sound off in the comments below!