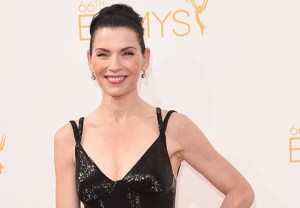 Six fierce women faced off during Monday’s Emmy Awards ceremony — and in the end, Good triumphed.

Julianna Margulies took home the Emmy for Outstanding Lead Actress in a Drama Series for her work on The Good Wife (her second win for the role of Alicia Florrick, and her third overall.)

“What a wonderful time for women on television!” Margulies exclaimed, before explaining that her award really belongs to the show’s writers and “gorgeous” cast — especially Christine “Beacon of Light” Baranski and Josh Charles, whom she misses every day.

Do you think Margulies deserved to win, or would you have given the Emmy to another deserving actress? Drop a comment with your thoughts on Margulies’ victory below.