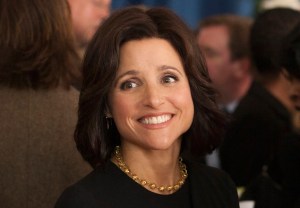 On Monday night, Veep‘s Julia Louis-Dreyfus returned to a place she knows well — the Emmy winner’s podium — as she picked up this year’s trophy for Outstanding Lead Actress in a Comedy Series.

This year’s field included Mike & Molly‘s Melissa McCarthy, Nurse Jackie‘s Edie Falco, Parks and Recreation‘s Amy Poehler and Girls‘ Lena Dunham. Louis-Dreyfus’ win was her fourth time nailing the category — she previously took home the Emmy in 2012 and 2013, and also in 2006 for The New Adventures of Old Christine.

Following an earlier bit in which Louis-Dreyfus pretended not to remember co-presenter Bryan Cranston from his days as a Seinfeld guest star — whose character made out with hers — Louis-Dreyfus paused on her way to the stage for a lingering mock kiss with the Breaking Bad star.

“Yeah,” she said, nodding, as a cutaway shot showed Cranston elaborately wiping his mouth in the crowd. “He was on Seinfeld.”