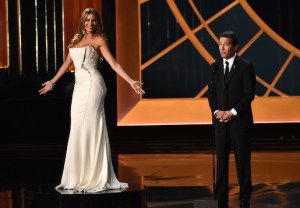 Backstage at Monday night’s Primetime Emmy Awards — where Modern Family had just five-peated as best comedy — Sofia Vergara was in no laughing mood about “sexist” criticisms made about her appearance during the telecast.

Called upon to (ostensibly) illustrate Academy of Television Arts & Sciences chairman Bruce Rosenblum’s speech about how diversity on television and how the medium is “always giving the viewer something compelling to watch,” Vergara stepped onto an on-stage turntable, where she eventually vamped and provided a visual distraction to the exec’s dry words.

Eventually stepping off the platform and feigning dizziness, Vergara quipped: “That’s why I stopped doing the car shows!”

Time.com, for one, derided the moment as a “blatantly sexist trope,” while Jezebel and Refinery29 said the actress was “treated like a literal object” and “used for little more than eye candy.”

Vergara — visibly irritated by the critiques, which include claims that she dealt a blow to feminism — told reporters in the Emmys press room, “I think it’s absolutely the opposite…. I absolutely think it’s ridiculous.” Justifying her participation in the segment, she said, “It means somebody can be hot and be funny and make fun of herself.”

What did you think of Vergara’s “turn” during the Emmycast?  (With reporting by Vlada Gelman)