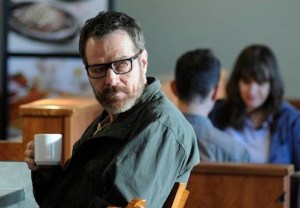 Monday’s Emmys ceremony separated the men from — well, the other men.

Bryan Cranston took home the award for Outstanding Lead Actor in a Drama Series for his work as the (probably) late, definitely great Walter White on AMC’s Breaking Bad. It was his fifth Emmy win and 14th nomination.

“I love to act,” Cranston said. “It is a passion of mine and I will do it till my last breath.” (Funny, I’m pretty sure Walter White said the same thing about cooking meth!)

Winning this award was, by no means, an easy feat. Cranston was up against the biggest names in small-screen drama, including The Newsroom‘s Jeff Daniels, Mad Men‘s Jon Hamm, True Detective‘s Woody Harrelson, True Detective‘s Matthew McConaughey and House of Cards‘ Kevin Spacey.

Do you think Cranston deserved to win, or would you have given the Emmy to another deserving actor? Drop a comment with your thoughts on Cranston’s victory below.