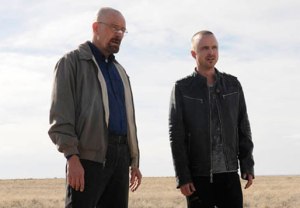 Is Breaking Bad the best drama series on TV  this year? The Television Academy says, “Yes!”

The AMC series, which wrapped its five-season run in late 2013, was presented with the Emmy for Best Drama Series during the 66th Annual Primetime Emmy Awards on Monday.

“This is indeed a wonderful time to be working in television,” creator Vince Gilligan said, thanking “the best” actors, writers and crew members in the biz. “We’re all lucky to be working now.”

Do you think Breaking Bad deserved to win, or would you have given the Emmy to another deserving drama? Drop a comment with your thoughts on the series’ victory below.