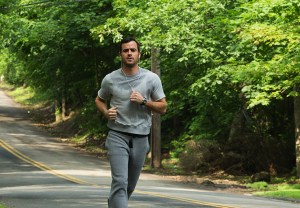 The penultimate first season episode of The Leftovers takes us back in time three years, to the days leading up to the Sudden Departure. And, although the hour shows us exactly what its title promises — “The Garveys at Their Best” — it also reveals the cracks in the foundation of the family that probably would’ve broken it up even if the world hadn’t been turned upside-down. Shall we rewind?

SHINY HAPPY PEOPLE | At first, the Garveys appear to be a pretty picture-perfect family. (And their house… good Lord, second only to Revenge’s Grayson Manor!) Kevin’s biggest sin is that he sneaks cigarettes behind Laurie’s back while he’s out for his morning jogs. Laurie not only is a successful shrink, she also talks — laughs, even — and wears colors other than white. Jill — adorable in her braces — is as bubbly a teenager as you’ll ever see beyond the Disney Channel. And Tom… well, he’s a bit fixated on his biological father, who wants nothing to do with him. But his angst is still preferable to the Holy Wayne mess into which he later gets himself. As for Garvey Sr., the chief is so beloved and sane that he’s named Mapleton’s Man of the Year. Meanwhile, just across town, Nora is also her radiant former self, doting on her kids and enthusiastically applying to be future mayor Lucy’s campaign manager.

ON CLOSER INSPECTION | Sadly, there’s more to our regulars than meets the eye. Among Laurie’s patients is Patti, who is sure that every day is the end of the world and suspects that her analyst can sense it, too. (We also find out exactly why Patti left a doggy bag full of poop on her abusive ex’s doorstep weeks ago… er, years from now — it was Laurie’s idea!) Laurie insists that she’s A-okay, but in fact, she’s anything but. She’s pregnant and reluctant to inform Kevin. Why? Perhaps because she can feel him pulling away. At Garvey Sr.’s Man of the Year party, Kevin looks at his amazing life and asks his dad, “Why isn’t it enough?” No man ever think it’s enough, the elder Garvey says, adding that “you have no greater purpose, because ‘it’ IS enough.” Later, try as Kevin might to save the deer that keeps accidentally trapping itself inside classrooms and trashing homes, the animal is hit by a car and he’s forced to shoot it to put it out of his misery. (Kevin and deer… they go way back, apparently.)

POOF! | That same day, when we arrive at the fateful moment of the Sudden Departure, Laurie is at the doctor’s office, listening to her fetus’ heartbeat but leaning toward abortion. (Her husband doesn’t even want to get the dog that they’ve been discussing, so how would he react to a baby?) Kevin is at a motel having sex with the driver of the car that hit the deer. Tom and Jill are at her science fair helping make a circuit. And Nora… she’s playing out a scene any mother can relate to, screaming at her family because juice got spilled on her cell (just as Lucy was calling about the job). And that’s that. In an instant, Laurie’s fetus has vanished from the monitor, Kevin’s lover is nowhere to be found, Tom and Jill’s circuit is missing a link, and Nora’s husband and kids have disappeared into thin air.

OK, your turn. What did you think of the episode? Wasn’t it cool — and painful — to see how different people were before the Sudden Departure? Gladys was downright sweet! Hit the comments!