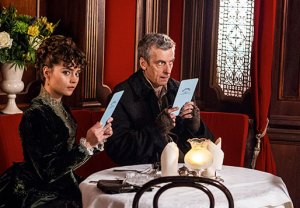 The following contains spoilers from the Season 8 premiere of Doctor Who. If you haven’t watched it yet, don’t walk, RUN to another TVLine story. If you have, allons-y!

The TARDIS has landed — or, rather, has been spit up — bringing with it one familiar face, and one very new one. But the 12th Doctor and his friends have more than just his latest regeneration to deal with; a dinosaur has been transported to Victorian London!

Before you tell us what you thought of the 12th Doctor’s first episode, let’s recap the episode.

Madame Vastra and Jenny bring Clara and the disoriented Doctor back to their place, where he freaks out about everything: the bedroom (“So you’ve got a whole room for not being awake in?”), the mirror (“Don’t look in that mirror, it’s absolutely furious!”) and especially the accents (“It’s spreading! You all sound so English!”). So Vastra feigns a Scottish accent and put the Doctor to sleep. She also has time to spout this gem of a line: “People are apes. Men are monkeys!” (Bring on the Vastra/Jenny spin-off already!)

Later, while Clara’s coming to terms with the Doctor’s regeneration — and being accused of considering the him her “boyfriend” — the Doctor jumps out the window and goes in search of the dinosaur. But just as he gets there, it spontaneously combusts. When Vastra asks who or what is responsible, he says the real question is, “Have there been any similar murders?” Then the Time-Lord-with-no-attention-span notices the mechanical man responsible for an earlier eye theft. So he jumps into the Thames after him.

The next morning, Strax brings the TARDIS back to their residence because he reasons that the Doctor will always come looking for his box and not be melted with acid. Then he “sends up” the newspaper, hitting Clara in the face. (Side note: I’ve always loved his Sontaran comic relief, but he is killing it this episode.) Later, just as Vastra figures out that the spontaneous combustions are being used to cover up what’s missing from the bodies, Clara rushes in with a newspaper advertisement inviting the “Impossible Girl” to lunch. Not long after she arrives at Mancini’s, the Doctor turns up, now dressed in a homeless man’s clothes.

As the Doctor and his companion have their first real post-regeneration conversation, they realize they both think the other is  responsible for the ad in the paper. But it doesn’t matter because they’re in a trap full of more droids (put a different wig on some of them and we’d be in “The Girl In the Fireplace” territory). Before they can escape, they’re strapped into their seats and lowered into the “larder.” They both get free, but while the Doctor escapes, he leaves Clara behind to face the leader. She attempts to escape by holding her breath, but fails when she gives into her burning — pun intended — desire to inhale.

Never fear, though, the Doctor has her back. Having slipped into another mechanical man’s face skin, he returns — along with Vastra, Jenny and Strax, who completely fails at his aerial silk descent. As more droids arrive, the Doctor follows their leader into his hot air balloon escape capsule. Once above London, the Doctor tries to reason with him, before threatening to kill the control node, saying he’s already come a long way to protect humans.

Down on the ground, the droids have overwhelmed Clara and the Paternoster Gang. But just as it seems they’ve lost, the droids deactivate and we see that their leader has been impaled on Big Ben. (Ouch!)

When they return home, they see that the TARDIS has gone. Nonetheless, Clara still changes back into her modern attire — just in time for the Doctor’s arrival. Upon entering it, she notes that the interior has changed (there are more round things on the wall). As they discuss who put the ad in the paper (it’s the same woman who gave Clara the Doctor’s number) she gets a call and it’s none other than  the 11th Doctor. Turns out he had time to give her a ring before his regeneration back on Trenzalore. He tells Clara not to be scared and asks her to help his newly regenerated self.

Hanging up, she turns to face the 12th Doctor, who asks her to see — really see — him as he’s still the man he’s always been. Once Clara does, she and the Doctor go out for coffee .

But the episode doesn’t end there! Moments later, we meet Missy, the Doctor’s “girlfriend” (?!) who introduces herself to the still alive control node and welcomes him to heaven.

Thus ends our introduction to the latest incarnation of the mad man in a blue box.

So what did you think of Peter Capaldi’s first outing as the Doctor? Were you happy to see Matt Smith again? Is “coffee and chips” the new “fish fingers and custard”? Are you ready for a Paternoster Gang spin-off? Sound off in the comments!