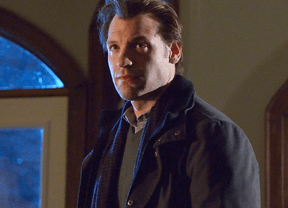 We’ve got questions, and you’ve (maybe) got answers! With another week of TV gone by, we’re lobbing queries left and right about shows including The Strain, Under the Dome, Switched at Birth and Rookie Blue!

1 | Girl Meets World got pretty heavy with the Maya/mom storyline, right? Even if it cribbed from BMW’s Sean story some? And is anyone else starting to worry about Riley’s wackiness? Young Cory wasn’t that looney, was he?

2 | Is it just us, or has Libby’s behavior on Masters of Sex become so deplorable that her scenes with Coral and Robert are practically unbearable to watch?

3 | Is one takeaway of Sunday-night TV that Dr. Ephraim Goodweather would have greater success in treating The Strain if he was stationed on The Last Ship? Also, after the M.E. has gone on a public feeding frenzy, might people believe Eph now? And did Ephraim really think he could hide from the police after they’d seen him through his glass front door?

4 | Was it funny to see The Last Ship treat a patient with a bucket of ice water right in the midst of all the #IceBucketChallenge mania? And is anyone else concerned that now they’ve found the cure, things will go a bit “Revolution Season 2″ as the good guys face nefarious factions back in the dystopic mainland?

5 | As cool as it is to see Falling Skies’ Maggie run through the Lara Croft training course, can we stop acting like bullets are in endless supply?

6 | Did anyone expect that Witches of East End would kill the mandragora this quickly?

7 | Whoa, did Austin & Ally actually kiss on the lips, at the prom (as seen in this sneak peek)?! How did Disney Channel not implode?? 8 | Reckless fans, why haven’t more people in Charleston called out the chemistry between Roy and Jamie? And considering they were dancing in the middle of the Mayor’s Ball, wouldn’t everyone “know” about their potential relationship?

9 | Switched at Birth‘s Bay, could your skirt be any shorter? And since Bay might be going to juvenile detention, might there be a crossover with The Fosters in the future?

10 | Best adoptive parents: The Fosters‘ Lena and Stef or The O.C.‘s Sandy and Kirsten Cohen?

11 | Could Teen Wolf‘s Officer Parrish be a phoenix? (Side note: Would everyone be fine if his supernatural powers were simply being “young” and “handsome”?) Also, after finding out that “Ariel” was Lydia’s nickname, does anyone else want to see Holland Roden play The Little Mermaid? 12 | Is it too soon to declare that America’s Next Top Model will crown a male winner this season? Have you seen those boys? Also, shouldn’t Fox think about poaching crazy-cute Matthew from the competition and casting him as David Annable’s muscle-y younger brother on Red Band Society? And surely, we misheard contestant Will when he declared the return of runway coach Miss J as “best moment of my life,” yes?

13 | Did Mistresses really need to make Ben so pale and sweaty when he arrived at Karen’s door to raise the possible specter of him having contracted HIV? (It’s 2014, for cryin out loud!) And did anyone really buy Dom giving Toni a second chance at the firm after she’d falsely accused him of sexual harassment — given that he’s already on shaky ground with his fellow partners? 14 | On Under the Dome, is Joe using a tablet model that hadn’t been released as of June 2013, when the dome came down? And, if so, is this an instance of product placement trumping continuity?

15 | Is anyone inadvertently finding themselves saying “How are yooooou?” in the slow, stilted style of Karen Gillan in ABC’s Selfie promos?

16 | At this point on Pretty Little Liars hasn’t “A” gotten a bit all-powerful? How did he/she/it know which street they’d use to get to the police station? Also, could we get more of the Caleb/Toby bromance? 17 | If Covert Affairs‘ Auggie “read” Annie’s top, what do you think it would say? And if McQuaid isn’t the bad guy, and Caitlin (apparently) isn’t, who is?

18 | Considering that Perception‘s Donnie would have been good in office, isn’t it sad that his run got cut short? Though, did anyone think murder would be responsible for that? 19 | Was this promo for the MTV Video Music Awards, which aired mid-scene during Finding Carter, the most obnoxious on-air tag ever? And speaking of the latter show, how does Elizabeth not have a stronger reaction to Grant yelling that he hates her?

20 | Snap poll: Who had the better zingers on Big Brother — the Zingbot or Kathy Griffin?

21 | Did any of Valerie’s prior So You Think You Can Dance performances prepare you for her epic wedding-reception hip-hop routine with Twitch? Also, is there any chance Ricky doesn’t wind up with the title of America’s Favorite Dancer?

22 | Suits fans, are you going to miss Katrina (assuming Amanda Schull is too busy with 12 Monkeys to make a return)? 23 | Is Graceland kinda overdoing it with the “sun-baked” tint given to the Mexico scenes? Would we otherwise forget where Johnny is? Also: Is Graceland an appropriate place for an eventual nursery?

24 | Does it feel like there’s zero chemistry between Mystery Girls‘ Holly and Detective Freeman?

25 | Given how little his absence affected the show, is it time for Rookie Blue‘s Chris to permanently take a leave?

26 | Did the Project Runway producers and Lifetime fail to look at a calendar and notice that their “create a dress for Heidi Klum to wear to the Creative Arts Emmys” challenge was going to air after the event, effectively spoiling the episode? 27 | Did you think for a moment that Defiance‘s Tommy had been infected with The Strain? Could the solution to the murder mystery have been more obvious? And does the Irzu storyline suddenly make sense?

28 | Did anyone else suspect that The Honorable Woman‘s Nessa was Kasim’s real mother? Doesn’t it seem like Nessa and Atika have romantic feelings for each other?