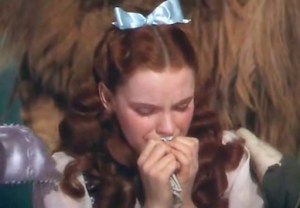 Don’t bother following the Yellow Brick Road; you won’t find anything there.

NBC has decided not to move forward with Emerald City, an hour-long drama that had already been ordered to series, our sister site Deadline reports. Emerald City was to be a modern re-imagining of the classic Wizard of Oz universe, blending elements from author L. Frank Baum’s 14-novel collection. (Think Game of Thrones, but with flying monkeys.)

As TVLine exclusively reported, the series was to feature a colorful cast of characters, including Dorothy, her love interest Henry, the witches — named North and West — and, of course, the Wizard of Oz.

It’s still possible Universal Television could shop the series to another network, but no such plans have been made.

Are you bummed that Emerald City is a no-go, at least for now? Drop a comment with your thoughts on the series below.