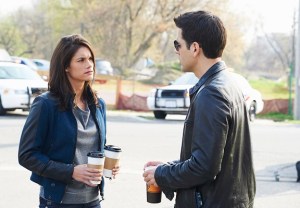 Warning: The following recap contains major spoilers from Thursday’s season finale of Rookie Blue. If you have yet to watch, avert your eyes. Everyone else, read on…

Rookie Blue‘s Season 5 finale didn’t spare any punches, wrapping with a boom, a bun in the oven and a big dilemma.

With so many juicy twists and cliffhangers, let’s not waste any time getting down to business.

BABY BOOM | The angry neighbor (the always terrific Shawn Doyle, Big Love) from a few weeks ago returns to terrorize 15 Division, setting off bombs around the city as payback for his son’s death in an explosion. One such bomb goes off in the evidence room at the precinct as Andy is searching for something. Miraculously, she walks away unscathed, save for some ringing in her ears and some hurt ribs. But she sure did give Sam a scare. Will you accept his darn key to his home now, Andy? Because Chloe was right — if you don’t, you’re an idiot. And with Sam’s ex Marlo back at 15 as an Intelligence officer — and possibly carrying his baby! — now is the time to commit. (Does the timeline add up on Marlo’s pregnancy? How many months have passed since she and Sam broke up?) A NEW ROMANCE | Nick keeps running into the lady (Being Erica‘s Erin Karpluk) who paid for his toothbrushes. He tries to get her phone number after knocking her off her bike as a bemused Gail videotapes the awkward exchange. Eventually, Nick tracks down the mystery woman (aka Juliet) at her favorite café and tells her he can’t stop thinking about her. Cuteness ensues, followed by kissing, and I can’t stop grinning. Thank you, Rookie Blue, for combining two of my favorite things: Nick Collins and Being Erica. Unfortunately, the adorableness is cut off after Nick tells Julia that he’s a cop and she hightails it out of there. So what big secret do we think she’s hiding that she’s so afraid of the police? Did she kidnap her “son”? Is she on the lam? (Sorry, I’ve been watching a lot of Finding Carter on MTV.) MOTHERLY INSTINCTS | Gail’s decided to start the adoption process with the girl whose mother died earlier this season. I love this storyline for Gail. After being stuck in a state of perpetual snark since her split with Holly, here’s a chance to see a different side of Gail. And bonus: Holly wants her back! But just after Gail tells her she’s ready to be a mother, Holly reveals that she accepted a job in San Francisco and she was going to ask Gail to move with her. Decisions, decisions!

KISS AND TELL | Dov breaks up with Chloe after he finds out that Wes kissed her and that she’s been lying to him. She shows up at the precinct in the pretty red dress she was going to wear to win him back. Dov is unmoved. He loves her, he admits to Marlo, but he doesn’t trust her.

AND EVERYONE ELSE… | Chris returns to work, and Sam hopes his vacation was “dry.” Chris may be back on vacay after failing to find a razor on the bomber, who ends up killing himself in the interrogation room. … Duncan almost gets himself blown up, of course. Nick ends up saving his life by insulating the bomb’s charge. Nick Collins is a superstar, and you can’t tell me otherwise.

Rookie Blue fans, what did you think of the finale’s baby cliffhanger? Will Dov, as Andy’s friend, spill the beans? What are you hoping happens with Gail and Holly? And was Fairytale Ruiner Guy totally hitting on Traci? Hit the comments with your thoughts and grade the episode via the poll below!