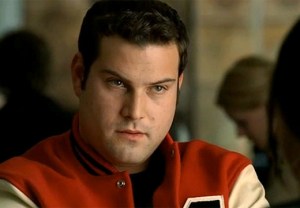 Max Adler, who recurred as Kurt’s closeted gay bully Dave Karofsky during the Fox musical’s first three seasons, has booked a major arc for at least four of the show’s 13 final episodes, according to The Hollywood Reporter — and he might be coveting his former crush’s fiancé Blaine (Darren Criss)!

The popular (and polarizing) Karofsky — whose last appearance came in a brief fantasy sequence during Season 5’s “Opening Night” — originated as a generic, slushie-throwing jock whose torture of the New Directions ultimately stemmed from his own struggle with his sexual orientation and same-sex attraction to Chris Colfer’s Kurt.

Midway through Season 3, Karofsky attempted suicide after his crush on Kurt was revealed to his classmates — and it wound up being his former victim who helped him visualize a future with a great job as a sports agent, a loving husband, and an adorable child of his own.

Since exiting Glee, Adler has recurred on ABC Family’s Switched at Birth, while the characters of Kurt and Blaine have survived a cheating scandal, a long-distance relationship and other growing pains to enter Season 6 engaged, in love and envisioning a future together.

Glee is set to introduce at least five new characters — all of them McKinley sophomores — in its sixth and final season, TVLine reported exclusively earlier this month. Lea Michele’s Rachel will reportedly return to McKinley High to reboot New Directions, though Kurt and Blaine’s reasons for returning to Lima, OH remain less clear at this point.

Are you excited about Karofsky returning to Glee? Or is his return a terrible mistake? Sound off in the comments!