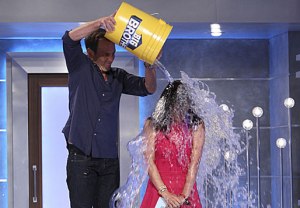 Big Brother, how do I love thee? Let me count the ways.

CBS’ reality staple has long been my annual guilty pleasure. While some may see it as nothing more than kitschy summer fodder — and, granted, it is — it’s also much more fun and clever than it’s ever given credit for.

Take, for example, Thursday’s live eviction show, which sent one houseguest packing and brought another evictee back into the game, all in the span of an hour. If you’re a Big Brother fan, you know episodes like these are enjoyable, intense and thoroughly entertaining. I wish I knew how to quit you, BB. But in the meantime, let’s revisit the highlights of Thursday’s broadcast:

RELATED  NCIS: LA Boss Hints at Plan to Be ‘As Noisy As We Can Be’ in New Time Slot

THE WEEK SO FAR | With two Detonators in power — and an early promise made to Victoria that she wouldn’t be nominated at any point this week — Derrick and Frankie had no choice but to nominate three fellow alliance members against Donny, their only remaining adversary. But the whole nomination process was a series of bad decisions, from using color-coded Skittles as the basis for which Detonators were nominated, to Christine doing a laughable job of throwing the Battle of the Block competition. Ultimately, Donny singlehandedly guaranteed himself safety for the week, while Christine mostly spent the past seven days stroking Cody’s hair and denying that she has a crush on him. (Sure, honey.)

Later in the week, when Team America was given the task of hiding their fellow houseguests’ clothing (and starting a neighborhood watch program to prevent it from happening again), the mission backfired on Zach, who was accused of being the Season 16 saboteur. Frankie saw this as a perfect opportunity to nominate his volatile other half, and promptly did so after using the Power of Veto on Caleb. (Zankie betrayal!) Also: Zingbot showed up, and it was awesome.

THE STRATEGY | Let’s all say this on three, shall we? 1, 2, 3: Pooooor Zach. Sure, Zach had a terrible social game and was a poor strategist. (I will forever get a chuckle out of this flustered line that Zach tried on Devin in Week 3: “Did I say I was coming after you? Yes. Did I mean it? No!”) He never stood a chance at winning the grand prize, if only because his jury members wouldn’t give him the satisfaction. But still, you can’t help feeling sorry for Zach Attack when his attempts to get the Detonators back on his side are utterly shut down. He tries to make nice with Victoria, too — someone he’s taunted all summer long — but the only thing she’s willing to do for Zach is steal back the pink hat he took from her weeks ago… and cut it up? Why? That was her hat! Oh, Victoria. I can’t possibly try to make sense of what’s going on inside your head.

THE VOTES | Pretty much everyone knows that Zach is about to be evicted — including Zach himself — so it’s no surprise when he’s ousted. It is a little surprising that the vote is unanimous, even after Donny promised to throw Zach a line, but I suppose Donny can’t afford to make any more enemies by voting against the majority. With that said, Zach makes the exit that you would totally expect from him (“See ya, losers!”) and promptly delivers a hysterical post-eviction interview. Among the highlights: Zach admitting that he wanted to be so hated by his fellow HGs that they would never give him the satisfaction of evicting him. (“Clearly, that was not the case,” he deadpans. That’ll do, pig. That’ll do.)

But wait — there’s more! As part of ” the most twisted summer ever” (jury’s still out on that one), the four evicted jurors are able to compete in one last challenge that will put one of them back in the BB house. The shuffleboard-esque competition consists of seven rounds, each of which allows the jurors five seconds to slide a colored disc onto a rotating central platform. Nicole and Jocasta — Jocasta! — have the most discs on the platform by the end of Round 7, but Nicole is deemed the champ due to one of her discs being closer to the center of the circle. Hooray, Nicole! Operation Take Down Christine is officially a go.

Other highlights of the broadcast: Team America successfully completes their 24-hour neighborhood watch mission (cha-ching!); some footage of the jury house reveals that Nicole and Hayden are more in puppy love than ever; and Julie Chen herself accepts hubby Les Moonves’ ALS Ice Bucket Challenge, concluding the live show by having none other than Will Arnett dump a bucket of ice water on her. (Unsurprisingly, his appearance did not make me want to watch The Millers.)

How do you feel about Zach’s eviction — and Nicole’s return? Were you shocked to see Jocasta leading the redemption challenge for a few rounds? At this rate, does anyone really stand a chance against Derrick? Sound off in the comments!