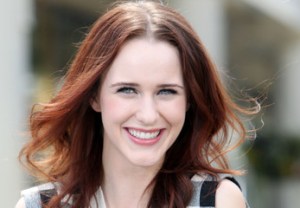 CBS’ The Dovekeepers has made another big hire, tapping House of Cards’ Rachel Brosnahan to star opposite NCIS alum Cote de Pablo in the four-hour miniseries, TVLine has learned.

From executive producers Roma Downey and Mark Burnett, the project is based on Alice Hoffman’s acclaimed historical novel about four extraordinary women whose lives intersect in a fight for survival at the siege of Masada.

Brosnahan, currently starring in WGN’s period drama Manhattan, will play Yael, “a uniquely beautiful and fearless young woman whose mother died in childbirth, and whose father forever blames her for that loss. During the dangerous journey they make together through the desert, Yael has a whirlwind romance which will haunt her life even after they arrive at Masada. Yet, Yael is able to find comfort from her supportive warrior brother, Amram (Pretty Little Liars‘  Diego Boneta), and kinship from her fellow dovekeeper, Shirah (de Pablo), as these two extraordinary women fight for survival in a crumbling world.”

CBS’ is eyeing a 2015 premiere for The Dovekeepers.