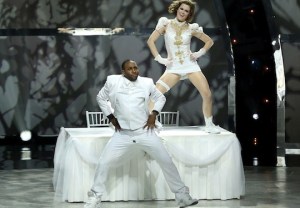 I’m not gonna lie to you: I went into tonight’s So You Think You Can Dance Top 6 performance episode with my mind made up.

Rudy and Tanisha got robbed last week. Valerie had no business being in the Top 6. For justice to prevail, the Season 11 crown could only end up in one spot: Atop Ricky’s artistically dazzling head.

RELATED The Middle Braces for Richard Kind as Sue’s Orthodontist

And then, just like that, a rowdy, randy wedding dance, a mind-bending Rorschach test and a brief blast of a favorite 1980 hit made me rethink everything — and I couldn’t be happier about it.

Indeed, despite Season 11 looking like it was going to wrap up in thuddingly suspense-free fashion, Valerie and Zack — the show’s resident tappers — brought last-minute, game-changing energy and commitment to the stage. And in the process, this pair of underdogs turned a coronation into a battle royale. In the words of Mary Murphy, “WOOOO-HOOOOO!!!!”

PHOTOS Saved By the Bell Turns 25: Tara Reid and 14 Other Forgotten Guest Stars

With that said, let’s jump right to a breakdown of tonight’s performances (and eliminations):

Dance of the Night: Valerie and All-Star Twitch (Hip-Hop, WilldaBeast)
Valerie got so down into this routine that I couldn’t even roll my eyes at Mary for her use of the adjective “swaggerocious.” Those isolations of hers were positively mesmerizing, and her little moonwalk atop the banquet table made me “LOL” with glee. Admittedly, Valerie has not been my favorite this season, and yes, I’m genetically pre-programmed to love anything set to Usher’s “Yeah,” but with the finale in plain sight, the underdog tapper matched the amazing Twitch, dropped it lowwwww and raised her game in the process.

Runner-Up for Dance of the Night: Zack and All-Star Fik-Shun (Hip-Hop, Phillip Chbeeb)
Might we have a challenger to Travis Wall’s title of Most Accomplished Contestant-Turned-Choreographer? Based on this crazy-inventive number, which turned Zak and Fik-Shun’s bodies into winking ink blots, I’d respond with a definite, “Hell, yeah!” Animation and isolation may not be Zack’s forté, but you wouldn’t have guessed it from watching the energy of the piece travel through Fik-Shun’s body, into the bright-eyed tap dancer and back again. The synchronization and attention to detail were as sublime as Cat’s metallic sequined dress, and the undercurrent of humor was as welcome as the words “Debbie Allen, guest judge.” (Dare to dream, yes?) If Ricky stumbles next week, the crown could easily fall into Zack’s eager hands.

Most Overpraised: Casey and All-Star Makenzie (Contemporary, Stacey Tookey)
Casey has grown tremendously over the course of the season, but if Stacey hadn’t set up the routine with a length explanation about a couple who “might only have one day left,” would this frantic series of steps have really had much impact? Sure, there were a few dazzling moves in the mix (like that crazy leveraged backbend!), but Casey and Makenzie’s connection ultimately felt more studied than natural, more actorly than actual. And at this point in the season, that’s just not enough.

Most Underpraised: Jacque and All-Star Will (Contemporary, Sean Cheeseman)
No, the judges didn’t have much negative to say about Jacque’s performance, but they seemed to focus a lot of energy on Will, on the ball, even on Sean Cheesman. Which didn’t seem quite fair, considering the way Jacque painted some incredible pictures with her body — and captured the giddy innocence of young love in the process. If girlfriend had to go the way of her boyfriend Rudy, this was a triumphant final impression.

Triumph of Costumes Over Dancing: Jessica and All-Star Ade (Jazz, Ray Leeper)
I’m always stoked to see Ade on the SYTYCD stage, but this “clubbers in Tokyo” number was like a pot of water that takes an eternity to come to a boil. Sure, the “ponytail strut” was fab, as Christina noted, but didn’t Jenna and Mark do it better last year?

Biggest Imbalance: Valerie and Ricky (Broadway, Spencer Liff)
Was it just me, or did it seem like Valerie had nothing to do but sit on a swing for the opening 25 percent of the number? And even after that, she never got asked to match any of Ricky’s more complicated leaps or pirouettes. Ricky, as always, was sublime, but I still feel like most weeks, he’s been stuck with choreography that’s held him back from pure greatness. When will he be paired with Allison Holker or Melanie Moore or Eliana Girard?

Dance That Would’ve Been Perfect if the Contestant Had Lost His Goofy Grin: Ricky and Anya (Cha Cha, Jean Marc Généreux)
If Rick was serious about not relying on his cuteness and actually matching Anya’s smoldering sensuality, how come he spent half the dance an “Aw shucks, am I actually pulling this off?” smile? Granted, he was pulling it off — at least in terms of rapid-fire footwork and full-bodied fluidity — but attitude counts in ballroom, too. And despite the judges’ comments to the contrary, I’m not sure the Season 11 front-runner ever truly “controlled that beast.”

Routine I Need to Watch A Few More Times Before I’m Sure How to Feel: Jessica and Casey (Disco, Dorianna Sanchez)
This routine was so fast and furious, I half expected Vin Diesel and Michelle Rodriguez to cameo, but some of the transitions into and out of the lifts felt a wee bit… stilted? I’ll go back and rewatch in the a.m., but my initial response wasn’t as joyous as I felt like it could’ve/should’ve been.

Best Solo: Valerie’s wicked fun tap to The Romantics’ “What I Like About You”
[Inert joyous emoticon of your choosing here, dear reader.]

What did you think of the Top 6? Take our poll below to vote for your favorite routines, then hit the comments with your thoughts on the performances and the eliminations!