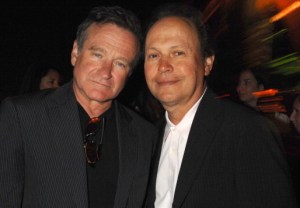 Billy Crystal will lead a tribute to Robin Williams, his friend of nearly 40 years, at the Primetime Emmy Awards being held Monday night in Los Angeles.

“We felt we needed to do something powerful and memorable,” E! News quotes Emmys exec producer Don Mischer as saying Wednesday morning at the official “red carpet rollout” at the Nokia Theatre. “Billy seemed like the perfect choice.”

The In Memoriam segment at large will feature a performance from Grammy-nominated singer/songwriter Sara Bareilles.

Days after Williams’ tragic Aug. 11 suicide, Mischer confirmed his intention to give the iconic entertainer “the proper and meaningful remembrance he so well deserves,” at the awards show airing Monday, Aug. 25 on NBC.