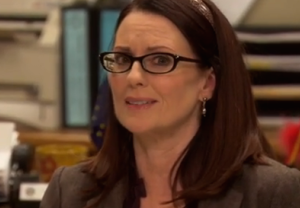 Parks and Recreation appears to be ratcheting up the twisted relationship between Ron and his unhinged ex in its final season.

TVLine has learned that Megan Mullally is set to reprise her role as Tammy 2 in Season 7‘s second episode, which is curiously called, “Ron & Jammy.”

The title suggests that an excised “mini plotline” from Season 6, in which Ron and Diane conspire to get Jon Glaser’s Councilman Jamm and Tammy II together, will see the light of day in Season 7.

But will the now-spoken-for Ron get sucked into the “Jammy” romance, as the episode title portends?

Parks and Recreation returns to NBC’s schedule at midseason.