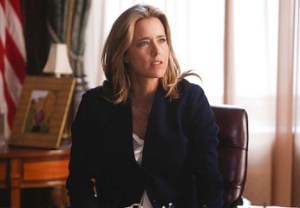 And so it begins….

CBS will air the Madam Secretary pilot twice on its premiere night, to hopefully offset the effect of a pre-scheduled NFL delay.

With CBS’ primetime line-up set to start a half-hour late, due to an NFL on CBS double-header, Madam Secretary will first premiere at 8:30/7:30c (leading out of 60 Minutes‘ season opener). That same episode will then encore at 10:30/9:30c, following The Good Wife‘s Season 6 premiere (which is pushed back to 9:30).

West Coast viewers, however, won’t be subject to the staggered schedule. Instead, the programs will roll out on the hour — 60 Minutes, Madam Secretary, The Good Wife, Madam Secretary encore — starting at 7 pm.