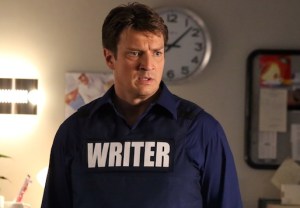 That Nikki Heat movie may have gone straight to DVD, but the future looks rosier for another of novelist Richard Castle’s creations.

With Castle creator Andrew W. Marlowe and executive producer Terri Edda Miller on board to serve as EPs, ABC is in the early stages of developing a new series based on Derrick Storm, the P.I.-turned-CIA freelancer that serves as the focus of Rick’s other bread-and-butter, our sister site Variety reports.

In “real” life, Hyperion Books has published several Derrick Storm mysteries, including Storm Front, A Raging Storm and A Brewing Storm, all with author “Richard Castle”/Nathan Fillion pictured on the book jacket.