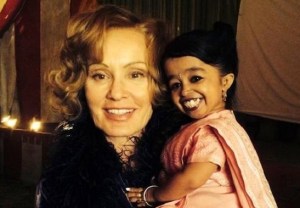 The Freaks are coming — in just seven weeks!

The network also released an official description for the fourth installment of the anthology creepsterpiece from Ryan Murphy and Brad Falchuk. It reads as follows:

American Horror Story: Freak Show begins its tale in the quiet, sleepy hamlet of Jupiter, Florida. The year is 1952. A troupe of curiosities has just arrived to town, coinciding with the strange emergence of a dark entity that savagely threatens the lives of townsfolk and freaks alike. This is the story of the performers and their desperate journey of survival amidst the dying world of the American carny experience.

Check out a new teaser below, then share your excitement level about attending the Freak Show!