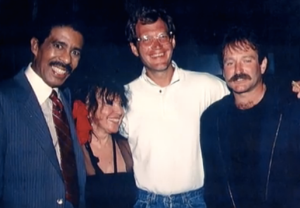 After recounting his early days working alongside a then-unkown Williams at The Comedy Store, Letterman (whose Late Show was in repeats last week) reminisced about — and featured video highlights of — the combined 50-plus times the beloved entertainer appeared on both his NBC and CBS shows.

“I didn’t have to do anything — all I had to do was is sit here and watch the machine,” Letterman shared. “And people would watch. If they knew Robin was on the show, viewership would go up because they wanted to see Robin. People were drawn to him because of this electricity.”