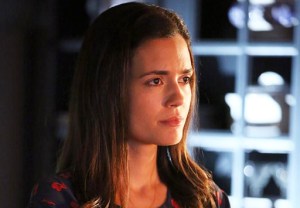 Melissa Hastings pulled yet another disappearing act on Tuesday’s Pretty Little Liars, leaving behind a gift for Spencer that neither she nor the audience ever thought we’d receive: answers!

According to her taped confession — which you know “A” is going to get his/her/its hands on — Melissa saw Spencer with a shovel the night Alison disappeared. She thought Spencer killed Ali, so she pushed her into a ditch and buried her. The catch? It wasn’t Alison; it was Bethany, and Melissa buried her alive!

(Guys, can we take a minute to appreciate that we actually received an answer to a mystery on this show? Never forget where you were when this episode aired. It shall live in infamy.) ‘HAUNTED’ | Tyler Blackburn told TVLine that Caleb would return to Rosewood a “changed” man, and this week, we finally got our first taste of his Ravenswood-related PTSD. Though he couldn’t bring himself to say the g-word to Toby out loud (ghosts!), he did admit to drinking because he’s “scared.” Hanna eventually got him to break down and tell her everything that happened in Ravenswood — the preacher, the demons, everything — and she seemed appropriately spooked. She also seemed very eager to see Ouija, which opens in theaters Oct. 24. #WatchOuija

MONARIA | Are Mona and Aria becoming… friends? After throwing a massive wrench in her date with Mike, Aria cornered her brother’s “girlfriend” in the bathroom, and they ended up having a surprising heart-t0-heart. But here’s my question: Could Mona be the girl Detective Tanner was referring to during her conversation with Byron? Though I’m assuming it’s Alison, this wouldn’t be the first time Mona sold out a “friend,” let’s be real.

Other observations from this week’s episode:

* Is anyone else curious about Paige’s mystery date? Are there any evil lesbians in Rosewood we have yet to identify?
* Has anyone Photoshopped Toby into a police uniform yet?
* I really enjoyed Emily and Ezra’s scenes together. I (friend)ship those two.
* Did anyone else not miss Alison this week? I’m thinking of pulling an Emily and severing ties to her, myself.

OK, your turn to talk: Were you surprised by Melissa’s confession? Who do you think is speaking to Detective Tanner? And who’s going to die in next week’s finale? Drop a comment with your thoughts and theories below.