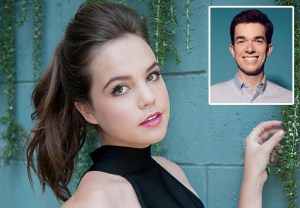 John Mulaney is about to meet his match — his 13-year-old female match.

Bailee Madison (Trophy Wife, The Fosters) will guest-star an upcoming episode of Fox’s new fall comedy Mulaney, TVLine has learned exclusively, playing Ruby, the daughter of Julia, a woman Mulaney is dating. The snag? Mulaney wants out of the relationship, but he can’t bring himself to dump Julia because it would mean giving up his friendship with Ruby.

Ruby and Mulaney’s connection might sound weird to you — and, to be fair, it kind of is — but consider this: Ruby is described as the 13-year-old female version of Mulaney, complete with his sophisticated sense of humor. (Her favorite movie, for example, is Blazing Saddles.)

Madison’s TV resume also includes recurring roles on shows like Once Upon a Time and Wizards of Waverly Place. She can next be seen starring opposite Catherine Bell in Hallmark Channel’s new series The Good Witch. She’s repped by Coast to Coast and John Carrabino Management.