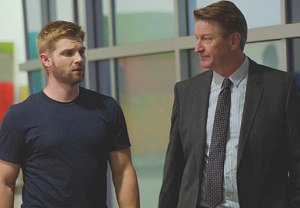 On Monday’s episode of Under the Dome, several key players got their wires crossed — both literally and figuratively.

Let’s take a closer look at “Awakening,” which, above all, found Barbie getting into more trouble than he ever encountered in Chester’s Mill.

LOST IN TRANSLATION | Forced to put quite a bit of trust into his father, Barbie asks his old man to get a message to Julia, which can be done via e-mail once Don gets the military firewall lifted. Barbie’s message is short, sweet and layered with a hidden message encouraging Julia to jump off the cliff in Chester’s Mill. But when Barbie heads to the playground in Zenith, eagerly awaiting Julia’s arrival, he realizes that security cameras are following him — as is a computer whiz by the name of Hunter (The Young and the Restless’ Max Ehrich), who unsuccessfully tails Barbie and tells him that his father tampered with the e-mail to Julia. Lo and behold, a quick peek at Mr. Barbara’s files reveals that he added a line to the message: “So take the egg and bring it with you.” Hmm, what’s that smell? Ah, yes. Something very fishy.

As it turns out, Hunter works for Don at Aktaion Energy; he once hacked into their computers and, when given a choice between working for the company and spending quality time in a prison cell, he chose the former. Now, he protects Aktaion from hackers just like himself, and he’s able to get a second e-mail from Barbie to Julia (more on that in a second).

On the other side of the dome wall, Joe and Norrie realize the wi-fi signal is sporadically coming back. They show Julia the first e-mail Barbie sent, but she’s skeptical that it’s even from him. Instead of jumping from the tunnel’s cliff, Julia and the teens opt to send a handwritten note off the cliff’s edge, with the hopes that it will end up in Zenith. But before they can do so, Barbie’s second e-mail comes through, advising Julia (through secret code, natch) to remain in Chester’s Mill and meet Barbie at the dome’s edge that night. Neither of those soldiers see Barbie hanging under the truck?

And meet him she does, though their reunion is fleeting. With Hunter’s help, Barbie is able to pose as a radiation specialist for Aktaion and hitch a ride on the underside of a military vehicle that brings him to the dome. But he accidentally passes a motion censor while running to the barrier, and once he arrives there, the jig is up pretty fast. Military officials apprehend Barbie, but before they take him away, he’s able to write a message to Julia on the dome surface: “Not safe out here. Don’t j—“ (“Don’t jump!” he screams, though it’s clear Julia can’t hear him.)

RUN OF THE (WIND)MILL | In slightly less dramatic Chester’s Mill news, Big Jim has appointed himself sheriff, and he offers walkie-talkies to the likes of Rebecca for protection, all the while continuing to spout about the dome’s plan for him. (Drink!) But it quickly becomes clear that only Big Jim is happy about Big Jim being sheriff, as evidenced by the destruction of the town’s windmill (which he helped hoist) and a car fire that’s set in a vehicle from his dealership. On a high note, the subplot involving Big Jim does provide my favorite exchange of the season so far:

Big Jim: I think someone’s trying to send me a message.
Junior: Not everything is about you, Dad.

I never thought I’d be proud of Junior for saying anything, but there’s a first time for everything under the dome, eh? Anyway, it turns out the culprit of these crimes against Big Jim is former sheriff Phil, who returns — alive, to my surprise! — feeling extremely bitter. But Phil, who’s still nursing a gunshot wound, is no match for Junior and Rebecca, who help Big Jim out of his shackles before Phil is tossed into a jail cell.

Big Jim’s final order of business for the day? Following Julia to the dome’s edge, where he sees that Barbie is not only alive (despite what he’s been told), but alive outside Chester’s Mill. Cue Big Jim’s serious face. Furrowed brow, clenched teeth. The works.

ALL SHOOK UP | Elsewhere in the episode, Pauline and Sam set out to help Lyle, who’s now babbling about his barbershop days and mumbling, “It’s in the cards” instead of repeating Melanie’s name. They’re able to get their hands on a new drug which gets Lyle speaking coherently again (unfortunately about the Rapture, sigh). Pauline presses Lyle about the meaning of “It’s in the cards,” and Lyle remembers that he had Pauline’s prophetic postcards with him when he jumped off the cliff in Chester’s Mill. The trio looks through Pauline’s postcards carefully, and she produces one more that she wasn’t able to send before the dome came down: It depicts a red door, which we know exists in Zenith’s woods… and could possibly lead back to Chester’s Mill.

OK, your turn. What did you think of the episode? Sound off in the comments!