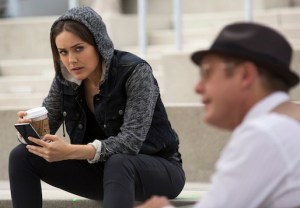 The freshman finale of The Blacklist left us with plenty of unanswered questions — and from the looks of it, Season 2 will pose even more.

NBC has released a handful of photos from the drama’s Season 2 premiere (airing Sept. 22 at 10/9c), and there’s a whooooole lot that we need cleared up.

RELATED  What Happens Next: Is The Blacklist‘s Red Really Liz’s Father?

* What could be inside not one, but two important-looking envelopes?

* Where are Liz and Red currently laying low? On one hand, the duo is sitting in plain sight on the front steps of a building (while Red casually scans the morning paper), but that doesn’t explain Liz’s woman-on-the-run attire.

* What’s the meaning of the music box Red seems to be tinkering with?

Also conspicuously absent from the photos are Tom, Berlin and FBI head Harold Cooper, all of whom were left MIA or injured at the end of Season 1.

So click through the gallery below to get your first taste of Season 2, then hit the comments with your thoughts on what the premiere might bring.