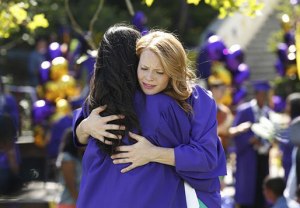 Switched at Birth‘s grads said goodbye to each other on Monday’s Season 3 finale, but there was one permanent farewell they weren’t expecting to make.

Nope, we’re not talking about Bay and Daphne’s unorthodox post-cap-and-gown “destination” — though that trip was a crisp slap leading to the emotional fetal position — but rather the closure of Carlton School for the Deaf. I mean, we all knew the institution was living on borrowed time, but did anyone expect the end to come quite this quickly?

Regina tells Daphne that Hawaii Wes won’t be pressing charges. But before they can share the good news with the Kennishes, a detective shows up to arrest Daphne. Turns out they found her prints on the construction site and the owner is pressing charges, meaning this would be her “second strike” (since she’s on probation). And thanks to a D.A. looking to make a point, Daphne’s now looking at spending up to three years in prison. While her family wants to do all they can to fight, Daphne refuses, saying she wants to take responsibility for her actions. This also means that graduation will be her last day of freedom.

As she’s congratulated by her friends — who aren’t aware of her impending arrest — Daphne begins to lament her wasted potential, realizing the high cost of her bad behavior. (Namely, med school.) It’s hard not to detect the note of envy in her voice as she lists all the things Bay has going for her. Nonetheless, Daphne pulls herself together and tearfully gives the speech she’d been voted to give, and you know what? She nails it. Her moment at the podium is a perfect tribute to all the characters we’ve come to love and the school that brought most of them together.

After the ceremony and all its good vibes, Daphne tells Bay she’s going to the station to turn herself in, but Bay won’t let her do it alone. Then, just as Daphne is about to give the detective her statement, Bay swoops in, gives up her plans to move to L.A. with Emmett and takes the blame instead. At first, Daphne is as shocked as we are, and makes her dismay known to Bay. However, when the detective returns and asks if Bay’s lying, Daphne says she isn’t, letting Bay take the rap for her. As Bay is led away, she simply says the experience will give her credibility as an artist. However,  the real question is what will this experience do to Daphne? Is med school really worth it?

* Emmett tells Daphne he wouldn’t be going to L.A. if Bay weren’t going along with him. (Daphne’s right, he really is going to be mad at her.)

* Travis’ mom makes it to the ceremony and tells him she’s proud of him in sign!!! Later, she tells him she’s been using an app to learn a sign a day, and he introduces her to Melody and Mary Beth. (Honestly, if this moment didn’t make you tear up, go to your doctor and have him or her make sure your heart is still functioning.)

* Lily realizes that she really does have feelings for Toby, and that she’s not “just fine bonking.” So when she discovers him upset over his wife’s request for an annulment, she suggests they “do nothing” together.

* Wes asks Regina to move to Hawaii with him. But she declines because of what’s going on with Daphne.

What did you think of Bay’s big switch? Did you want to see Daphne finally face the repercussions of all her actions? Grade the Switched at Birth finale via the poll below, then hit the comments to back up your choice.