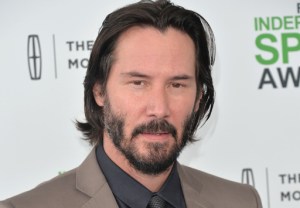 Keanu Reeves‘ next excellent adventure may be on the small screen.

RELATED Nickelodeon Orders School of Rock Series to Premiere in 2015

Reeves will headline and executive-produce Rain, a potential hour-long action series about a half-Japanese assassin whose job makes it difficult for him to form relationships, our sister site Deadline is reporting. Based on a book series by Barry Eisler, and produced by Slingshot Global Media, Rain is not yet attached to a network.

Despite appearing on several shows during his career, Rain would mark Reeves’ first starring role on television.

* Speaking of Reeves, NBC is developing a pilot based on his 1997 film The Devil’s Advocate, according to Deadline. As in the movie, the pilot follows a public defender who doesn’t know his new law firm is run by — wait for it — the Devil!

* Nick and Drew Lachey will star in Lachey’s Bar, a new docuseries premiering on A&E in 2015. The show will follow the brothers — and former members of boy band 98 Degrees — as they pursue their dream of opening a bar in their hometown: Cincinnati, Ohio.

* The Hunger Games will make its network television debut Friday, Oct. 10, at 8/7c on ABC Family.