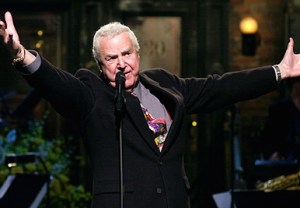 Veteran television and radio announcer Dominick “Don” Pardo, best known as the voice of Saturday Night Live, has died. He was 96.

Pardo retired from NBC in 2004, but continued to provide the introductions for SNL — most recently, pre-recording them from his home in Arizona. He had only missed one season of SNL — the show’s seventh — giving him a longer tenure than even Lorne Michaels (who stepped away for five seasons).

“I can’t imagine the show without [Don],” Michaels once said, “and as long as he’s there, I stay young.”

Pardo — a 2010 Television Hall of Fame inductee — also lent his voice to game shows The Price Is Right, Jackpot and Jeopardy! He and iconic entertainer Bob Hope were the only two people to have lifetime contracts with NBC.