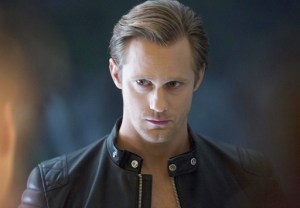 Sunday’s True Blood set the stage for an epic series finale stand-off, and as the great Pamela Swynford De Beaufort once said, “all roads lead to f—ing Sookie.”

Picking up where last week’s episode left off — with Bill, noble as always, refusing to drink the Hep-V cure — Jessica asked her maker to release her. It was expectedly gut-wrenching, much like when Pam and Eric did the same dance back in Season 5, and certainly did nothing to make Bill’s future appear more hopeful.

Furious with Bill for putting Sookie through so much pain (d’aww!), Eric paid his old friend a visit, demanding he reconsider and drink the cure. Bill went on an insane — albeit super accurate — rant about how she’s light and they’re dark and he “almost raped her,” but not once did he offer an actual reason for not taking the cure.

After some much-needed self-reflection, Bill decided to pay Sookie a visit — but it might be too little too late, as the Yakuza are in the process of squeezing Sookie’s address out of Eric. With Pam at death’s door, courtesy of Mr. Gus’ handy stake trap, will he crack and send the Yakuza to interrupt Sookie and Bill’s reunion?

‘THIS IS A GOODBYE’ | Ladies and gentlemen, Sam Merlotte might have just made the smartest decision in True Blood history. Packing up and moving to Chicago with Nicole was the right thing to do, and given his long history with Sookie, I’m not the least bit surprised he wasn’t able to say goodbye to her face. Sam may have been a peripheral character for the past few seasons, but if you’re a long-time Truebie, there’s no way you didn’t get all misty-eyed while Sookie read that letter. And for fans of Charlaine Harris’ novels, don’t even tell me you didn’t appreciate Sam’s “I love you.” (Color me curious, though: Sam supposedly makes a major “choice” on next Sunday’s series finale, and I have no idea what that could possibly be. A sudden return to Bon Temps, perhaps? A complicated labor during which he has to decide whether to save Nicole or the baby? … Sorry, that just took a sharp turn onto Morbid Avenue.) SQUARE DANCE | The Hoyt-Brigette-Jason-Jessica situation took an interesting turn this week, as Jessica went rogue and broke the No. 1 rule of glamouring someone: Don’t tell them everything you made them forget! After reminding Hoyt why he really ended up in Alaska — including that she cheated on him with Jason, which inspired a well-deserved punch in the money-maker — Jessica took her ex to bed for an appropriately over-the-top sex scene, complete with swelling music and a boisterous *ahem* climax.

Meanwhile, Jason and Brigette spent the night together without actually “spending the night together.” That’s right, folks, Jason finally made a non-physical connection with a real-live woman. (Side note: I loved when Jason told Brigette they weren’t going to have sex, and she responded with, “I just broke up with my boyfriend. Why would you even think I was going to have sex with you?” Sometimes it takes an outsider to point out how twisted the residents of Bon Temps truly are.) BACK IN BUSINESS | Keith must be one hell of a dancer, because I’ve never seen Arlene in brighter spirits. Not only did she officially re-open Bellefleur’s this week, but she invited everyone over for a party — which coincidentally ended up being only the named characters we’ve been watching all season.

Jessica even made amends with James, apologizing for not taking more of an interest in him. (But let’s be real for a second; she has nothing to apologize for after he had sex with Lafayette in the back of their car. Like, absolutely nothing.)

“AAAAT LAAAAST” | Of course, my favorite part about this episode (and potentially this season) was the long-awaited sex scene between Eric and the ever-thirsty Ginger. Finally immune to Hep-V, Eric was free to fulfill Ginger’s series-long wish of a romp with the vampire viking god. And while Eric and Ginger’s rendezvous was a major no-no from an HR standpoint — not only is he her boss, but they did it at work — it was a much needed break from the weight of this penultimate hour. It was also surprisingly short-lived; after all that build-up, I think she got about seven or eight thrusts before Ginger literally orgasmed herself unconscious. Did it go exactly as I anticipated? No. But was it an incredible experience only Ginger could provide? Hell yes.

OK, your turn to talk: Was Ginger and Eric’s “encounter” everything you hoped it would be? Could Pam really be a goner? And does Bill still have time to change his mind? Drop a comment with your thoughts on the episode below.