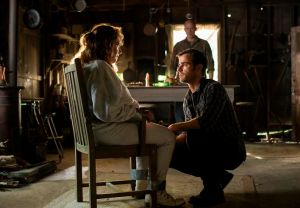 The events that transpire in this week’s episode of The Leftovers are so shocking that it’s probably going to take until next week’s episode for my jaw to stop hurting from hitting the floor (repeatedly!). Do you dare read on and relive the horrors of “Cairo”?

THE LAST SUPPER | Early on, Nora’s (first?) dinner at the Garveys’ goes bad when Jill accuses her of packing heat. Though Nora is able to prove that she’s not concealing a weapon, Jill remains so unconvinced that she later picks a fight with Aimee and asks what we’ve all wanted to for weeks: “Did you [bleep] my dad?” Aimee says yes, but (I think) only because she’s so hurt that Jill would wonder, and moves out. Meanwhile, Jill gets the Frost twins to join her as she breaks into Nora’s house to further investigate. There, Jill finds — hidden in a game of Trouble in Nora’s kids’ room — the (not technically) smoking gun. And this crushes her, theoretically because it means that neither Nora nor anyone else can ever be okay after The Sudden Departure. Off this, Jill approaches her dad’s mad dog with a knife and, thankfully, sets it free rather than slit its throat. And finally, we realize just how lost this kid is: She shows up on the doorstep of the Guilty Remnant and asks if she can stay there for a while.

ULTIMATE EVIL | Before Jill follows in her mother’s footsteps, we see that the GR is busy as hell preparing for Memorial Day. And, the GR being absolutely vile, this does not mean hanging a flag on their lawn or stocking up on burgers and beer. No, it appears that the chain-smoking nutbags are organizing clothing belonging to all of Mapleton’s Departed and buying dummies that resemble the MIA in order to put on some kind of horrific display. (Charmed, I’m sure.) In other GR developments, Meg flips when Matt starts circulating “Come Home Megan” fliers, and attacks the reverend both verbally and physically. Afterward, Laurie notepad-scolds the newbie, scribbling at her that violence is weak and daring her to prove her strength by apologizing to Matt. When she does, Nora points out the obvious to her brother: “She’s not sorry.” Which only pisses off Meg more. She’d love to see Nora’s face on Memorial Day, she hisses to Laurie. (GR rules be damned, she’s a real Chatty Cathy this week.) When her mentor finally slaps her to shut her up, we get a sense that Meg kinda likes getting a rise out of Laurie. But what are we to make of that? (And the fact that Meg’s “grief was hijacked,” as Matt puts it, because her mother died the day before The Sudden Departure?)

CABIN IN THE WOODS | Where is Patti while all of this is going on? Well, we’ve saved the worst (best?) for last, folks. Along with Garvey, we learn that, during a blackout, he had a few beers with Dean, then knocked out the GR leader and took her to the Evil Dead cabin — which, it turns out, is in Cairo, NY — in order to murder her. As you’d expect, he is pretty upset about this turn of events. Which, in turn, upsets Dean — he wants Garvey to bring back the other side of his personality, the decisive, angry, violent one. WTH is Garvey to do? What can he do? He doesn’t want to kill Patti, but if he lets her go, she’ll ruin him. She flat-out says so. Even after Garvey fights Dean (who may be hearing the same voices that Garvey Sr. does) to keep him from smothering her, she maintains that, the second she’s set free, he’s toast. Finally, alone with Patti, Garvey asks what she wants. And her answer is so poetic and mystifying that, when she’s done, all he can say is, “Now I know why you don’t [bleeping] talk.” But their conversation does yield some concrete intel. For instance, Patti insists that Laurie didn’t join the GR because Garvey had failed her, she joined because the cult gave her a purpose, “something to live for, something to die for.” Waaait a minute… did you kill Gladys? Garvey asks. “She was a okay with it,” Patti replies nonchalantly. Just like Laurie will be okay with it when it’s her time. Holy crap, how crazy are these people?!? As if to prove us wrong, no matter how crazy we think they are, once Garvey releases Patti and to hell with his future, she picks up a shard of glass and slits her own throat! And, just like that, the point of no return fades from view…

OK, your turn. What did you think of the episode? Were you more surprised that Patti had Gladys killed or that Patti killed herself? Hit the comments!