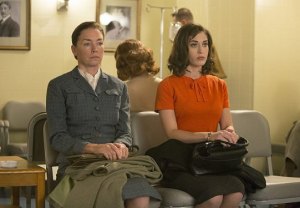 THE PERFORMANCE| It’ill be a sad day indeed when Masters of Sex lays to rest Nicholson’s terminally ill Lillian DePaul. Sure, on the surface, the doctor is prickly and uncompromising, not only judging Virginia for her hands-on research with married colleague Bill but condemning her for it. (“Let me understand,” she said this week, rearing up to dismiss Virginia’s rationalizations, “it’s okay because you’re taking notes?”)

But, just beneath that flinty exterior, the actress illuminates a character who’s so complex and vulnerable that we want to study her. And hug her. Without ever admitting it, Lillian let us, if not Virginia, know that her anger wasn’t so much about the fling or even that Virginia was always going to dump their work for Bill’s, it was about the fact that Virginia could do better, that she IS better, than that.

Later, Nicholson really brought to the fore the softer side that Lillian only reluctantly reveals — first, expressing her surprise that, even after their spat, Virginia would drive her to her doctor’s appointment and then, confessing that she’s scared of what’s to come. She even did the thing that’s hardest for her — reached out, albeit in a very Lillian way. Under the circumstances, “I can’t really afford to be upset with you,” she said, “now can I?”

When the end comes — and, given Lillian’s declining condition, it seems likely to come soon — we’ll try to honor Nicholson’s memorable work by being less sorry to lose Lillian than we are happy that we got to know her at all. HONORABLE MENTION | No strangers to this thing called “TV,” we’ve seen plenty of characters come back from the dead, eliciting all manner of reactions. And yet Defiance’s Jaime Murray managed to show us something new when Stahma first caught sight of Kenya, the woman she loved… and murdered. “No. Not possible,” she said under her breath, before locking eyes with her “resurrected” ex and then bolting the Need/Want, quite uncharacteristically out of control for the cool Castithan cucumber. Murray later showed us a Stahma frantic to dig up her dead friend to prove the impossible, and then a Stahma loathe to inform Amanda that her sister has not in fact returned home. And in every scene, including the silent graveside goodbye, the subtext was the same: As much as Stahma needed Kenya to stay dead, she very much wished their love was alive. HONORABLE MENTION | All season Rebecca Schull’s turn as April’s grandmother Emma on Chasing Life has punctuated the show’s sadder moments with sharp bursts of humor, her comedic timing transforming even the simplest of lines into a hilarious quip. But whether quietly joking about her granddaughter’s fertility treatments (“How would you like your eggs?” “Frozen.”), or using her quick wit to get rid of someone intruding on a private family moment, Schull makes it clear that Emma does everything out of love for her family. Laughter may not be effective treatment against cancer, but Schull proves small doses make it easier to heal.