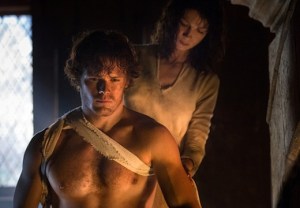 Q: What’s black and blue and plaid all over?

A: James Alexander Malcolm MacKenzie Fraser, by the end of this week’s Outlander.

Yep, Big Red takes a beating both in flashback and the present, but it’s Claire who receives the hour’s biggest sucker punch – metaphorically speaking – when her only escape plan is curtailed at the last minute. Those wily Scots!

So sing me a song of a lass that is gone, and we’ll review the major developments of “Castle Leoch.”

JAMIE’S BACK STORY | We rejoin Claire and the bedraggled band of travelers right where we left them, in the courtyard at Castle Leoch. Mrs. Fitzgibbons, the castle’s domestic goddess, is slightly scandalized by Claire’s lack of stays. And petticoat. And about 10 other items of clothing. But when Jamie mentions that Claire knows a little about medicine – “Ye’re a healer, then?” “Something like that.”– the older woman takes notice and basically strong-arms him into letting Claire examine his wounds again.

In a cozy room inside the castle, Jamie sits, shirtless, in front of the fireplace. Say it with me, all ye who’ve been waiting years to see this moment live and in the strapping flesh: Ahhhh. His back is an ugly mess of scars that Claire can’t help but notice. “Redcoats,” he says by way of explanation. “Flogged me twice in the space of a week.”

The basics: When British troops, headed by Black Jack Randall, came to the Fraser household and started causing trouble a few years back, Jamie threw some punches. That caused Randall to hold a gun to Jenny’s head, rip the bodice of her dress and then force Jamie to look at his humiliated, half-nude sister while Randall threatened to rape her. Good guy, eh? All of the fisticuffs led to Jamie getting flogged, arrested and taken to a nearby military fort.

Jamie’s tale of woe distracts Claire for a moment, but then it starts to dawn on her how surreally, inexplicably, majorly screwed she is — particularly when Jamie asks if her husband is alive. (Technically, remember, he’s not.) The realization causes her to start crying.

Without hesitation, Jamie wraps his good arm around her and makes little noises to calm her. He kind of kneels to come closer to her; in the book, he pulls her onto his lap, leading to an American Pie-style moment I’m glad the series chose to skip; it always felt a bit Harlequin-y to me. (But if you disagree, I wanna hear it in the comments.)

Claire finishes crying and pulls herself together while Jamie promises her that she never needs to be afraid while he’s with her. But what about when she’s not with him? He counsels her never to forget that she’s a Brit in Scotland.

MEETING HIMSELF | It’s too bad Post-Its haven’t been invented yet, because – as the hour progresses – Claire could really use a handy, visual reminder of Jamie’s advice. After a long nap and some styling by Mrs. Fitz, Claire at least looks the part of an 18th–century Scottish lady. (Side note: As I watch Claire stripped and fitted with, in addition to other acoutrements, a bustle to broaden her hips, I wonder yet again: WHY did I not live during this time period? Mrs. Fitz would’ve sized me up, tossed the bustle to the side and been like, “Och, lassie? I think we’re good here.”) Soon after, Claire is summoned to meet Dougal’s brother, Colum, the laird (aka boss) of the castle. He’s cordial, shrewd and – as Claire’s voice-over informs us – sporting the painfully bowed legs of someone suffering from Toulouse-Lautrec Syndrome.

She explains that she’s a widow on her way to stay with family in France. Colum is just as wary of the Sassenach and her story as his brother is, but he’s a wee bit more polite about it. And while Claire’s in his study, she gets two key pieces of info: It’s 1743, and she can catch a ride on a transport to Inverness in five days.

MAKING FRIENDS AND INFLUENCING PEOPLE | But that’s a long way off, and there’s lots of trouble the outlander can get herself into before then. One night at dinner, for instance, she nearly causes a familial incident when she incorrectly infers that Colum’s son, Hamish, is actually Dougal’s offspring. And don’t forget: Pretty much everyone there thinks she’s a British covert agent. But Claire makes herself useful by tending to Jamie’s injury, walking out to the paddock where he works to bring him lunch and change the dressing on his shoulder. It’s during one of those visits that Claire finds out why Jamie’s been using a fake last name – MacTavish — and hiding out in the stables: He’s wanted for murder, because when some friends came to break him out of the fort, a soldier died. Jamie didn’t do it or anything, but the British forces don’t seem to care very much about precise details.

He confesses to Claire that there’s a price on his head, but that his uncles Dougal and Colum are allowing him to stay at the castle for now.

TAKE ONE FOR THE TEEN | Claire also makes friends with Geillis Duncan, an odd bird of a woman who seems a little drama-club, even given the fact that every single person looks like they just stepped outta RenFaire. “They say I’m a witch,” she humblebrags. Still, she’s amiable and doesn’t outright accuse Claire of being a British spy, so… best friends 4eva! The two women attend a community meeting at the hall, aka listening to Colum rule (in Gaelic) about complaints brought before him (in Gaelic). Bottom line: There’s a lot of un-subtitled Gaelic.

The biggest stir comes when an angry dad brings in his young blonde teenage daughter and demands that Colum punish her for loose behavior. To save the girl – whom he barely knows — from public shame, Jamie volunteers as tribute steps up to take a beating in her stead. And what begins as a sweet gesture (Jamie later explains that he’ll bounce back from the physical blows much faster than she’d recover from the humiliation) gets ugly when Dougal has his minion, Rupert, beat Jamie to a pulp. A pretty pulp, but still. Think there’s a little in-family tension there?

NOT SO FAST! | Claire rushes out to make sure her patient isn’t too badly bruised (he’s not), and the pair do some very subtle flirting before she informs him she’s leaving in the morning for Inverness. He’s clearly disappointed, but bids her farewell as the girl from hall – Laoghaire, Mrs. Fitz’s granddaughter – stares at him from the doorway as though she’d like to drizzle honey all over his bannock, if you know what I mean.

The next day, Claire’s exit is delayed when Colum wants an audience with her. (Side note: Please let this show make armwarmers a thing we all do. I love them.) She’s taken to the small room where she and Frank, in the 1940s, went at it in the pilot. Turns out, Castle Leoch had a healer who died of a fever, and the room was his surgery.

Claire’s all, “That’s great. Now which way is the hell outta here?”, but Colum has another idea: She’ll be the new castle medic. “But I’m leaving,” she protests. “No, you’re staying,” he replies, countering her assertion that his decree makes her a prisoner. “Only if you try to leave,” he says, leaving her there to sob, alone.