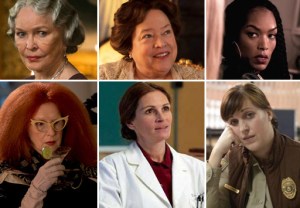 The formidable ladies of American Horror Story: Coven cast a spell on the 2014 Emmy race for Best Supporting Actress in a Miniseries or Movie — snagging half the spots in the category.

RELATED Emmy Poll 2014: Who Should Win Lead Actor in a Miniseries or Movie?

The question looms now, though, whether the anthology series’ trio of nominees — Frances Conroy, Kathy Bates and Angela Bassett — might split the vote and open the door to one of the other women in the race.

Last year’s champ, Political Animals‘ Ellen Burstyn, returns this time around for her role in Flowers in the Attic. Rounding out the field: Fargo‘s Allison Tolman and The Normal Heart‘s Julia Roberts.

RELATED Emmy Poll 2014: Who Should Win Lead Actress in a Miniseries or Movie?