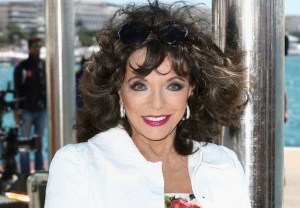 The soap legend will guest star as the mother of Elizabeth Hurley’s Queen Helena on E!’s first scripted series, The Royals.

People.com first reported the news, noting that Collins’ “formidable” Grand Duchess of Oxford will come with “an entourage and an agenda.”

The series stars Hurley as the family’s matriarch, who comes into conflict with her head of security’s daughter (played by Ravenswood‘s Haley Lu Richardson) when the young woman begins a secret romance with Prince Liam (William Moseley, The Chronicles of Narnia films).

The Royals is set to premiere in early 2015.

Stoked to see the 81-year-old actress back on your TV? Sound off in the comments!