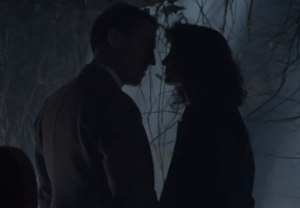 We’ve got questions, and you’ve (maybe) got answers! With another week of TV gone by, we’re lobbing queries left and right about shows including Masters of Sex, True Blood, Teen Wolf and Chasing Life!

1 | From The Killing Episode 3: Wouldn’t Linden have seen Skinner’s wife’s car outside the cabin, when she went to lob the cell phone into the lake?

2 | Between that scene in Outlander (above photo) and that scene in Masters of Sex, wasn’t it a great week to be a female TV character?

3 | Speaking of Masters of Sex, anyone else dreading the imminent (and tragic) conclusion to the Virginia-Lillian storyline? And can Hollywood please find a project — maybe a buddy comedy?! — that re-teams Lizzy Caplan and Julianne Nicholson?

4 | As much as we enjoyed Jessica’s schoolgirl-crush enthusiasm at seeing ex Hoyt again on True Blood, didn’t it ring a little false considering how they left things — with her treating him like a pesky fly that needed swatting? Also, could the show have provided any weaker pay-off to Tara’s season-long arc? We’ve all buried guns in our front yards at one point or another, so why the mystery?

5 | How long must one mourn their ex-husband before moving on with their former lesbian lover? (According to Witches of East End, about 18 hours — but we want to know what you think.) And after Dash’s last spell went so wrong, wouldn’t he know better than to dabble with magic, especially when it involves death? (P.S. Did they get his flashback mustache at a Halloween store?)

7 | Where does Major Crimes’ Sharon Beck rank among TV’s Most Despicable Mothers?

8 | How sweet was it that The Fosters‘ Lena knew to call the plumber after seeing Steph’s video message? Also, is there any way Anna’s return could actually end well?

9 | Now that Teen Wolf‘s Braeden and Derek have had sex, should we automatically put her on death-watch? (That’s usually how this works, right?) And considering most of the adults in his life know about him being a werewolf, why is Scott worried about his dad finding out? 10 | How was Under the Dome‘s Sam able to track Pauline down so quickly? Did he know he was bound for Zenith this whole time?

11 | What ever happened to Caleb’s supposed PTSD from Ravenswood? He’s seemed just fine ever since he came back to Pretty Little Liars. (And is anyone else concerned about his diet? If “A” doesn’t get him, a heart attack might.)

12 | During the Chasing Life finale, were you fearfully waiting for Leo to appear in April’s dream, signaling that he had died? And his voicemail message is totally about changing his mind regarding the operation, right?

13 | Granted, Rizzoli & Isles perhaps didn’t want to get heavy again so soon after writing out Frost/the late Lee Thompson Young, but did the show underplay the loss of Jane’s baby too much? But props to TNT’s promo department for that “Rizzoli is gonna adopt Tasha!” fake-out.

14 | Didn’t Finding Carter‘s David trying to convince Elizabeth to call Lori feel like he was trying to “write” another chapter in his book? Also, why is Carter the only one who gives Grant any attention? 16 | Who’s having a rougher summer: Suits‘ Mike or Graceland‘s Mike?

17 | Did RuPaul’s appearance on Mystery Girls make anyone wish for a show where RuPaul solves crimes?

18 | Could Legends have found a more blatant way to strip Ali Larter near-naked in the very first episode? (And did her ensuing lap dance give you flashbacks to Heroes webcam model Niki?) Also, does Tina Majorino’s hair deserve separate billing?

RELATED  TNT’s Legends: Do You Spy a Hit?

19 | Now that The Quest has mentioned “dragon’s tears,” can we assume the One True Hero will be facing one in the finale?

20 | Had Defiance’s Nolan not noticed Kenya’s missing scars, was he bound to sense something was anatomically “different” if their romp played out? Is Tommy’s goatee selling you on the “kid” as a foe to Nolan? And regardless of Datak’s grumbling, shouldn’t he and Stahma have been much dirtier after digging so many holes? 21 | Of all the Big Brother pros that could return for an interview with Julie, they had to pick Rachel?

22 | Rush could do worse than having the likes of Rachel Nichols for a stalker, areweright?

23 | Did anyone else think Rookie Blue‘s Nick was going to become the abandoned teens’ guardian?

24 | Why did the police on The Honorable Woman only pick up one item from which to get Kassim’s DNA?