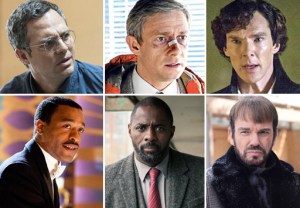 The six nominees for the 2014 Emmy for Lead Actor in a Miniseries or Movie all share one thing in common: None of them have an Emmy on their mantle (or anywhere else in their home, for that matter).

RELATED Emmy Poll 2014: Who Should Win Lead Actress in a Miniseries or Movie?

One of these fellas, of course, won’t be like the other by the time the August 25 telecast is over, but until then, let’s celebrate their unity in the “It’s an Honor Just to Be Nominated” Club by listing all six — and the number of career Emmy nods they’ve tallied.

To be fair, let’s list in order from most nominations to fewest: