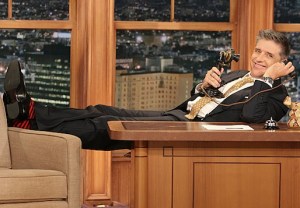 Craig Ferguson is eyeing his next TV gig — one that’ll get him to bed at a more reasonable hour.

The Scottish-born comic, who is stepping down at the host of CBS’ The Late Late Show in December 2014, is in final talks to launch a daily, syndicated 7pm talk show that will air on all Tribune Media stations, according to Variety.

Ferguson’s latest venture is being envisioned as a 30-minute mix of comedy and interviews that would debut in fall 2015 and lead into reruns of either Two and a Half Men or The Big Bang Theory.

Excited that Ferguson won’t be off the airwaves for too long? Sound off in the comments!