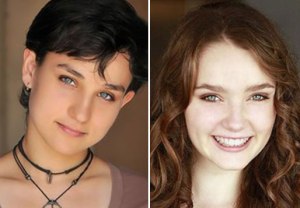 MTV is hoping to make its Scream pilot No. 1 — with a “Bullet” — by recasting a major role.

Bex Taylor-Klaus (The Killing‘s Bullet, Arrow‘s Sin) will now play Audrey Jensen, best friend of Willa Fitzgerald’s Emma. She replaces Reign‘s Amy Forsyth, a decision that was reportedly made after the table read for the pilot, according to our sister site Deadline.

The daughter of a Lutheran pastor, Audrey is described as an artsy loner who aspires to be a filmmaker. The project — penned by Jay Beattie and Dan Dworkin (Criminal Minds, The Event, Revenge) and helmed by Jamie Travis (Faking It, For a Good Time, Call…) — kicks off with a YouTube video going viral, which will have adverse repercussions for Audrey and seemingly serve as the “catalyst for a murder that opens up a window to [her] town’s troubled past.”

In addition to the recast, Scream has also added Bobby Campo (Being Human), Connor Weil (Sharknado) and Joel Gretsch (Witches of East End) in recurring roles.