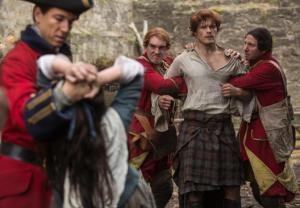 The reason for the enmity between Jamie Fraser and Frank’s lecherous ancestor becomes clear in this exclusive clip from Saturday’s episode (Starz, 9 ET/PT), which finds Jamie throwing punches to protect his sister, Jenny.

The flashback shows the origins of Jamie and Randall’s hatred for each other and introduces Laura Donnelly (The Fall) as the redhead’s feisty sibling.

Elsewhere in the hour, Claire meets both the Laird of Castle Leoch — Dougal’s brother, Colum — and the enigmatic Geillis Duncan. And when clan leaders learn the time-traveler is a healer, she becomes a captive in the castle.

Press PLAY on the video below to watch Jamie’s impassioned, if futile, attempt to defend his sister.