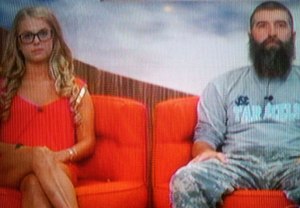 Eviction nights on Big Brother are always an unpleasant affair.

But on Thursday’s live broadcast, the atmosphere was especially gloomy, as two of Season 16’s most likable contestants were at risk for eviction.

Read on to find out who was sent packing from the BB house, and which two houseguests are now in power:

THE WEEK SO FAR | Frankie suffered most of the backlash from last week’s double eviction — so much so, that when he was nominated against Caleb for eviction, the self-proclaimed Beast Mode Cowboy refused to help Frankie in the Battle of the Block competition. (Drama!) But Frankie pulled off a solo win anyway — intrigue! — leaving only Donny and Zach on the block. And, after Zach nabbed the Golden Power of Veto and saved himself from elimination, a complicated game of Telephone among The Detonators resulted in a plan to backdoor Nicole. (Something that HOH Christine specifically promised Nicole she wouldn’t pull this week. And yes, this might just be how Big Brother works, but I still have a few choice expletives for Christine that aren’t TVLine-appropriate.)

THE STRATEGY | In an effort to get the voting houseguests back on her side, Nicole tells each of The Detonators (and Victoria) that eliminating her is not a smart decision. (Direct quote: “That’s a stupid move!“) It’d be much wiser to eliminate Donny, she says, who will come after Derrick, Cody, et al. if he remains in the game. And while Derrick isn’t thrilled to hear that his allies are considering ousting Donny over Nicole, he still seems to give the idea some thought. (Or, more accurately, this video package is edited to make it look like Derrick gives it some thought.)

Elsewhere, Christine, Caleb and Frankie are treated on a trip to the Dallas Cowboys’ training camp, after proving victorious in the NFL-themed Battle of the Block competition. (And as a nice plug for CBS’ Thursday Night Football fall lineup.) But if you had to leave the room for this part, don’t worry: You only missed Caleb geeking out over his Texas roots, Christine gaping at the football players’ height and Frankie saying he “loves country folk” in an “Oh, aren’t they cute?” sort of way.

THE VOTES | Alas, Nicole’s efforts to rally the troops are fruitless. She’s evicted, 6-0, but is met with raucous cheers from the studio audience and gives some of the best post-eviction sound bites yet. On Frankie’s relation to Ariana Grande: “It makes sense, he’s good at everything. Acting… and… whatever else.” On whether she plans to keep in touch with any of her fellow HGs: “Um… I like Donny!” On Christine’s unexpected backdoor plan: “I don’t think very highly of her as a person.” Say what you will about Nicole, but you can’t say she isn’t genuine.

THE WALKING DEAD | In this week’s HoH competition — the last one that will result in co-Heads of Household this season — houseguests must correctly answer questions related to the “zombie apocalypse” news bulletins that were broadcast throughout the house during the previous night. The competition is pretty much a lock for The Detonators, when Derrick, Cody, Frankie and Zach are the only ones left standing after just a few questions — but it’s Derrick and Frankie who reign supreme. (How many photos of Ariana Grande do we think Frankie will receive this week?)

Were you as bummed as I was to see Nicole leave the Big Brother house? Who would you like to see head to the jury house next? Can the contestants stop gasping whenever an evicted HG’s photo turns black and white? (It happens every week, guys!) Hit the comments!