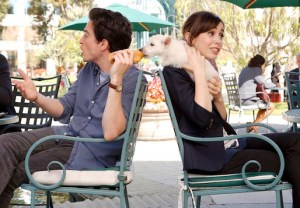 You can get an early jump on website wonk Andrew’s eight months, three weeks, five days and one hour romance with no-nonsense lawyer Zelda, thanks to an advance online screening of the NBC comedy A to Z.

The Katey Sagal-narrated rom-com — which stars Ben Feldman (Mad Men) as a dating site staffer who believes he is fated to be with Zelda (How I Met Your Mother’s Cristin Milioti), a disgruntled customer he just met (but perhaps crushed on at a years-ago concert) — is now available for streaming on Clear Channel’s digital properties and apps, as well as the NBC app, NBC.com, Hulu, Xfinity and other doohickeys.

But most importantly, an “extended,” 90-seconds-longer edit of the premiere is handily embedded for you right below. (A to Z makes its broadcast debut on Thursday, Oct. 2 at 9:30/8:30c, sandwiched between Kate Walsh’s Bad Judge and the final season of Parenthood.)