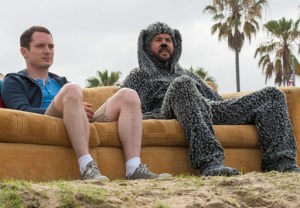 For a comedy about a grown man in a dog costume, FX/X’s Wilfred has surprisingly evolved into one of the darkest shows of our time — and Wednesday’s two-part series finale proved to be its most twisted hour yet.

Despite his lung cancer’s rapid progression, Wilfred began the hour in high spirits as his “Godly mission” to help Ryan find happiness had finally been achieved. But a surprise visit from Jenna’s ex threatened to ruin everything, sending Wilfred into a tailspin during his final days, before he eventually died. (Like I said, dark.)

OK, here’s where things get ba-nanas: Before he died, Wilfred convinced Ryan that he was actually a god named Madaman (Mataman? Mattdamon?), and that he’d been sent to Ryan to help him achieve happiness. This story was corroborated by Ryan’s mom, who revealed that his real father was Charles, the leader of the Flock of the Grey Shepherd. Charles used to preach about a “chosen one” destined to be visited by a “dog god,” but before Ryan got his hopes up, his mother told him Charles died in prison. Fully believing this to be true — because why not — Ryan allowed Wilfred’s spirit to lead him to an old barn, where he met Charles (who totally did not die in prison, by the way). Charles explained that there was no such thing as a “dog god” or a “chosen one”; he totally invented both concepts out of thin air. To add to the weirdness, the cult member who used to dress up as the dog god looked exactly like Wilfred.

Once the truth began to sink in, viewers were treated to a trippy montage of flashbacks between Ryan and Wilfred — only this time around, it was very evident Ryan had been speaking to a regular, non-talking dog all along. All the arguments, all the shenanigans, all the chaos had been brought on solely by Ryan with absolutely no help from Wilfred.

There you have it, folks: The “Wilfred” we’ve grown to tolerate during the past four seasons is neither dog nor god, but rather a figment of Ryan’s imagination. He doesn’t seem to care, though, as he ultimately decided to keep Wilfred in his life forever, despite now being aware of his non-existence.

So… all’s well that ends well?

And now, let’s talk about this insane hour: Were you surprised by the (multiple) revelations? Are you satisfied with the series’ ending? Drop a comment with your every frustration — and any explanations you want to offer up — below.