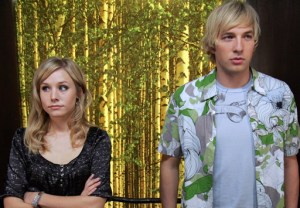 The Veronica Mars cast is taking this whole “reunion” thing to the next level.

Premiering in mid-September on CW Seed, Play It Again, Dick will star Ryan Hansen (as himself) as he attempts to get a show made about his Mars character, Dick Casablancas. Filming on the eight-episode series has wrapped, and thanks to BuzzFeed, we now know which of our favorite Marshmallows we’ll be seeing again very soon.

Chris Lowell (Piz) and Ken Marino (Vinnie) will only be appearing as themselves, while Amanda Noret (Madison) and Lisa Thornhill (Celeste) will only be playing their Mars characters.

* Investigation Discovery’s Surviving Evil will return for a 10-episode second season on Sept. 3 at 9/8c. Hosted by Charisma Carpenter (Buffy, Angel), the series recounts real-life stories of women fighting back against their attackers.

* DirecTV has renewed Rogue for a 20-episode third season.

* Tyson Ritter will be back as Oliver Rome in the upcoming sixth (and final) season of NBC’s Parenthood, the actor/rocker happily shared on Twitter:

* ABC will premiere The Story of Frozen: Making a Disney Animated Classic, a behind-the-scenes special about the creation of the biggest animated film of all time, on Sept. 2 at 8/7c.