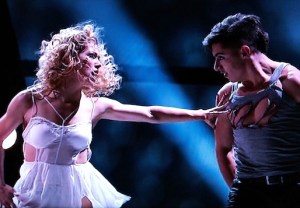 That bit of Michael Jackson lyrical gobbledygook is a fitting intro to my recap of tonight’s So You Think You Can Dance Top 8 telecast — seeing how the end-of-episode results made absolutely no sense whatsoever.

Hold up now. Valerie and Jacque are two of Season 11’s final three women? The most adorable TV character since Teletubbies‘ Po got rejected by America? Jenna Dewan-Tatum loved errrrything — no “v,” no second “e,” no discretion whatsoever?

Color me crestfallen — with a side-order of anticipation that maybe next week, there’ll be a perfect storm of choreography, music, costuming and partnering that will finally allow Ricky Ubeda to be great (no chaser).

With that bit of probably misguided optimism, let me hand out my own awards for tonight’s SYTYCD festivities (centered around the music of the late Mr. Jackson himself):

Dance of the Night
Rudy and All-Star Allison (Jazz, Ray Leeper)
Oh Em Gee, Allison Holker is a remarkably evocative dancer. But as her desperate, crazy, sexy “Dirty Diana” teased and tempted family man Rudy, the cherubic contestant matched her intensity — both physically and facially — transforming himself into an altogether different kind of performer than we’ve seen this season. That last eye-popping lift-and-catch — combined with Rudy’s raging bull of a solo — had me convinced he’d make the finale, but expecting 100 percent justice in the world of reality-competition series is like holding one’s breath for a calorie-free Butterfinger. (Mmmm…Butterfinger.)

Runner-Up for Dance of the Night
Tanisha and All-Star Nick (Contemporary, Stacey Tookey)
It’s hard to balance brute strength with effortless elegance, but that’s what Tanisha achieved in this dreamlike tale of love lost. For the record, I didn’t buy Nigel’s complaint about Tanisha’s lack of “vulnerability” — seeing how the routine was about Nick’s rememberance of “the one that got away,” with Tanisha merely serving as the physically whispered memory of happier times. Girlfriend did exactly what her choreographer wanted — but maybe, in Nigel’s mind, that made her too much a threat to his favored Jessica?

Worst of the Night
Jacque and All-Star Twitch (Hip-Hop, Dave Scott)
I’m sorry, but I get down harder at wedding receptions. Twitch (as always) was scintillating, but Jacque fluttered and floated when she needed to drop and punch. No bueno!

Most Surprising(ly Solid)
Casey and All-Star Comfort (Hip-Hop, Pharside & Phoenix)
For most of the season, Casey’s seemed as hard-hitting as a Ziploc bag of feathers, but he got funky and dirty as a reluctant victim of Comfort’s killer spider — completely selling me on a routine whose “deadly kiss” theme has been done about 10 too many times on the show.

Biggest Gap Between Contestant and All-Star
Valerie and All-Star Ryan (Samba, Jean-Marc Généreux)
Ryan was scorching — even in that absurd sleeveless sheer shirt — but by comparison, Valerie came off slightly clumsy, particularly in spots where the duo had to make use of the full stage. Combined with her pedestrian solo, I really wish she’d been the one sent packing.

Worst Choreography
Ricky and All-Star Jaimie (Contemporary, Travis Wall) — Sorry, contrary to SYTYCD edict (and the judges’ knee-jerk praise), Travis Wall can make a misstep now and then, and the frantic movement of the dancers against the deliberate pace of “Smile” struck me as exceedingly odd. Plus, for a routine that promised Ricky’s bones would escape his skin, I didn’t see enough opportunities for true extension.

Routine I Need to Watch a Few More Times Before Probably Admitting It Was Awesome
Jessica and All-Star Will (Contemporary, Mandy Moore)
There were some absolutely fascinating poses throughout the number — starting right with that “wheelbarrow” that had Jessica balancing on one arm. And yes, that final embrace of “Earth” and “Harried Human” was touching. But I’m still not sure this one rose to the level of a three-judge Standing O.

Most Overpraised
Zack and All-Star Makenzie (Broadway, Spencer Liff)
Sure, the routine was pretty and sweeping and looked like it came straight from a Broadway stage, but I didn’t detect an ounce of chemistry between Zack and (my least fave All-Star) Makenzie. For a piece set to the kicky “The Way You Make Me Feel,” I wound up not feeling much of anything at all.

What did you think of the Top 8? Take our poll below to vote for your three favorite routines, then hit the comments with your thoughts on the performances and the heinous eliminations!